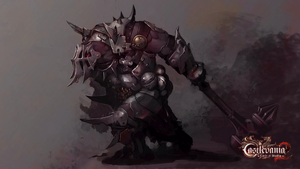 The Dungeon Jailer is a type of enemy in Lords of Shadow 2. These enemies are powerful and resilient, with many unblockable, albeit clumsy attacks (which are capable of harming nearby enemies) and large amounts of health. They are also fully armored on the front side of their body, forcing players to attack them from the back during the first encounter with them. After the player receives the Chaos Claws, they can be used in order to shatter the protective armor of the Dungeon Jailers. Whenever a Dungeon Jailer is slain, it will drop a Dungeon Key to enable further access to secrets within the castle.

Dungeon Jailers are essentially minibosses, or tougher variations of enemies like the Horned Demons. They can attack with their clubs and will light them on fire to strengthen their attacks. They also throw out two types of grenades, one blows up on impact and the other will swivel around the room/area as it leaves a trail of black powder (possibly gunpowder) and explodes when it is finished, lighting the trail on fire and creating a small sort of enclosed space to get around or fight in. Dungeon Jailers can also light their hammers on fire by inserting the weapon into a source of flame, making most of their attacks unblockable as well as increasing their damage. The flames on the hammer can be extinguished by using the Void Sword to shoot void projectiles at the Jailers.

Some of the jailers were especially violent and unscrupulous, dismembering their own during the “flesh tournaments” held under the castle. As a reward for their exploits, they won the right to keep the cadaver and the armor of those they defeated. Devouring the bodies, they developed their physiques even more, becoming giant masses of muscle. With the metal, they forged crude armor, with plates leaving some parts of their back exposed, and an enormous hammer capable of breaking any defense when hot.

The fear they inspire in the rest of their kind makes them the undisputed masters of the dungeon. As proof of that, they carry a key that gives access to a section of their territory.

Add a photo to this gallery
Retrieved from "https://castlevania.fandom.com/wiki/Dungeon_Jailer?oldid=235928"
Community content is available under CC-BY-SA unless otherwise noted.