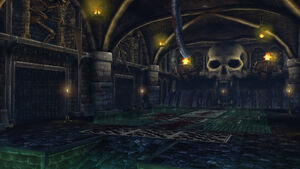 Dungeons, Prisons, and Torture Chambers are common types of environments in the Castlevania series. In them, people or other creatures captured by Dracula's armies are held prisoners.

Cells, cages, and torture instruments of all kinds are common sights in these foul places located deep below the castle. The fate of those unfortunates who end up in them is either to be kept alive to serve as human cattle and be devoured by the Dark Lord's gruesome pets, or as a reliable source of blood to sustain the vampire population.

Other times, people who were abducted from nearby villages are put temporarily in a cell to be later carried to the castle's arena and meet their untimely demise at the hands of dreadful creatures for the amusement of the audience; or, in some cases, taken to the laboratories and perform living experiments with them. Yet some other times, prisoners are just thrown into a cage and left there, forgotten, to rot away slowly until the day they die.

Rats are usually found lurking through the corridors of these areas, and the idea of prisoners hunting them down to eat should not come as a surprise.

Retrieved from "https://castlevania.fandom.com/wiki/Dungeons_and_Torture_Chambers?oldid=264031"
Community content is available under CC-BY-SA unless otherwise noted.