The Eagle, also known as Altair, is an enemy in the Castlevania series. With broad wings, they are atrocious birds that bear their charges into battle. They may carry a Hunchback with them.

Eagles first appeared in the original Castlevania, where they would fly in a straight line across the screen, drop a Hunchback onto the ground, and then continue on their way. This type of eagle also appeared in Vampire Killer and Castlevania Chronicles. They were later replaced by other flying creatures that dropped other types of hoppers, such as Harpies, which dropped Gremlins, and large Bats that dropped Flea Men.

Eagles have also been seen behaving similarly to Ravens. In Castlevania II: Simon's Quest, it is essentially a larger version of the Raven that hunted outside of towns. In Castlevania: The Adventure, the raven-like bird is called an Eagle in North America, but a Death Bird in Japan.

In newer games, starting with Castlevania: Symphony of the Night, eagles are usually seen mounted by Flea Men.

In some stages in Rondo of Blood, Hawks act much like Eagles and other droppers do in other games. They fly in straight paths, occasionally dropping Flea Men. In the River stage, they fly right in front of Richter while he is on a raft, and dangle treasure chests in front of him, which can contain sub-weapons, hearts, gold, or other items.

Another Hawk, which has built its nest at the top of the Clocktower, holds a Key.

Altairs appear in Tristis Pass and Oblivion Ridge. They spawn endlessly in the areas they are encountered in, albeit they appear only one at a time. They enter the screen from one of the top corners and then swoop and dash at Shanoa, continuing their way whether they hit her or not. Sometimes, they carry a Flea Man with them, which they drop on the ground and then continue their way without actually attacking.

They drop the Eagle Feather, which along with a Black Ink, is one of the required items in order to complete George's "Artists Can Be Selfish" quest. 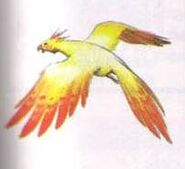 Eagle from the Game Boy Nintendo Player's Guide for Adventure

Pan in eagle form from Lords of Shadow