Ectoplasm is an enemy in the Castlevania series. It is a substance created by souls who cannot find rest.

Ectoplasm (from the Greek ektos, meaning "outside", and plasma, meaning "something formed or molded") is a term used to denote a substance or spiritual energy "exteriorized" by physical mediums and said to be associated with the formation of spirits.

Ectoplasm is said to be formed by physical mediums when in a trance state. This material is excreted as a gauze-like substance from orifices on the medium's body, and spiritual entities are said to drape this substance over their nonphysical body, enabling them to interact in the physical world. Some accounts claim that ectoplasm begins clear and almost invisible, but darkens and becomes visible as the psychic energy becomes stronger. Still other accounts state that in extreme cases ectoplasm will develop a strong odor.

Ectoplasm is a substance left by the corpses of men who have regrets. It is usually depicted as a colored blob with several human faces formed within it (similar to Dracula's second form in Dracula's Curse). Touching it usually curses the player. It floats around the air slowly and can take several hits to destroy. Striking it once without killing it usually causes it to speed up momentarily.

Ectoplasm made its first appearance in Super Castlevania IV, although it lacks its characteristic human faces in that version, and instead displays several colors which change rapidly. When it is destroyed after sustaining three hits, it expands out into a horizontal bar and disappears.

In Castlevania: Curse of Darkness, Ectoplasms are found in the Garibaldi Temple and several other places. It drops Uncurses, and if it touches Hector while its color changes to violet, he will be cursed, although this is also the moment when it opens its stealing window.

Ectoplasms are significantly more dangerous in Castlevania: Order of Ecclesia as they completely seal off Shanoa's attacks with Curse, as her attacks are fully MP-reliant. 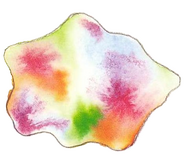 Ectoplasm from the Circle of the Moon instruction booklet

Unused portraits of Ectoplasm from Curse of Darkness

Retrieved from "https://castlevania.fandom.com/wiki/Ectoplasm?oldid=323847"
Community content is available under CC-BY-SA unless otherwise noted.