Start a Wiki
watch 13:05
'Castlevania: Lords of Shadow' - Stage 31 (Electric Laboratory)
Do you like this video? 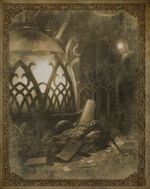 Electric Laboratory is the second stage of Lords of Shadow Chapter 7. The level's unlockable trial requires that Gabriel finish the level and deactivate the Mechanical Monstrosity using only the Tesla coil in the lab after it is activated.

This part of the castle was once where acclaimed scientist Friedrich von Frankenstein conducted his experiments into artificial life. He was quite mad and often would conduct horrific and depraved acts trying to discover the secrets of life itself. His own demise was equally gruesome. The Vampire Queen took him, but kept him alive. Thus over many centuries, she fed on him daily, keeping him at the brink of death, yet living and aware. Why she did this is only known to a few...she once loved life and loved living things and, before she became a lord of shadow, she vowed she would punish Frankenstein for his vile acts. As a Dark Lord, she was able to keep her word.

Retrieved from "https://castlevania.fandom.com/wiki/Electric_Laboratory?oldid=168473"
Community content is available under CC-BY-SA unless otherwise noted.