The Elgos Order is an organization whose main objective is to guard Dracula's sealed material possessions, as well as the grimoires that contain the history of all heroes and battles that had happened throughout the Castlevania timeline. It was formed shortly after the Demon Castle War of 1999, with the intent of creating lessons to prevent people from falling to the same fallen nature of humans that hastened Dracula's revival. 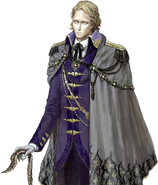 Lucy Westenra
Add a photo to this gallery

Retrieved from "https://castlevania.fandom.com/wiki/Elgos_Order?oldid=276709"
Community content is available under CC-BY-SA unless otherwise noted.