"Eric Lecarde, master lanceman, has volunteered to take his friend's place in the hunt. (However, he hasn't told John the real reason behind his appetite for vengeance: the Countess turned the love of his life, Gwendolyn, into a vampire.)"
— Official background

Eric Lecarde (エリック・リカード, Erikku Rikādo?) is one of the two protagonists of Castlevania: Bloodlines. He later appeared as a supporting character in Castlevania: Portrait of Ruin, as well as one of the combatants in the 3D fighting game Castlevania Judgment. He is the father of Stella and Loretta and a close friend of John Morris.

Eric possesses a quiet demeanor. However, when holding the Alucard Spear, it's as if he becomes a different person.[1]

Disclaimer: Portions of this page are based on internal worldbuilding material that was not made publicly available and thus might be subject to change. (See EGM fax references)

Eric was born in Segovia, Spain to the Lecardes, a magistrate family who were related to the Belmont clan by blood and were in possession of an enchanted weapon known as the Alucard Spear.[2][3] He was the second son of a family of five siblings. Like his other relatives, Eric began to learn fencing and martial arts at age 3. By age 10, he was the best fighter in the whole family and the most proficient spear-user in Spain. However, Eric preferred sculpting to martial arts, and as a result, repeatedly argued with his father. When he was 18 years old, he left his house to become a sculptor.[1]

Five years later, Eric joined the construction of the Sagrada Familia in Barcelona. On the night of a thunderstorm, he was visited by a mysterious old man. The old man told Eric that Elizabeth Bartley, Count Dracula's niece, was revived from a 300-year old slumber and planned to bring her uncle back to life. He handed Eric a key and told him to head back to his ancestral home to fulfill his destiny as a vampire hunter (unknown to Eric, the identity of the old man was Michael R. Belmont). After a few days of consideration, Eric made up his mind to go back.[1]

However, upon his return, Eric was met with tragedy. His fiancée, Lucy Seward, who had been engaged to Eric since he was 11, had her blood sucked by Elizabeth ten days before he had come home. Eric met with a bedridden Lucy, and she told him that her soul was trapped inside Dracula's castle, located at Bistritz, Romania. After asking Eric to save her soul, she calmly passed away. Lucy's body was later buried with her head cut off and a wooden stake piercing her heart.[1]

When Eric's rage against Elizabeth reached its peak, the key which was given to him by the mysterious, old man began to shine. It led Eric to small, marble temple located in the corner of his house's garden. When he opened the door with the key, he came upon the Alucard Spear tied to a chain, emitting a pale, blue light. Once he grasped the spear, the chain loosened and felt a shock inside his body. It was then that Eric awoke to his destiny as a vampire hunter.[1]

After Dracula's body had been turned to ash following his defeat at the hands of Quincy Morris, Dracula's resentful spirit continued to wander the earth, searching for a new body. Elizabeth became involved in the outbreak of World War I, and plotted to use the souls of the millions people who died as sacrifices to bring back her uncle. In order to conduct the ritual, Elizabeth had to reach Castle Proserpina, located above Whitby, England, where the spirit of Dracula was waiting.[1]

When Eric arrived in the town of Bistritz, he encountered Quincy's son, John Morris, who just like him, was distantly related to the Belmont family. Together, they headed to the ruins of Dracula's castle in search of Elizabeth.[1]

After instead being faced with one of the monsters under control of the sorceress Drolta Tzuentes, Eric and John followed Elizabeth across Europe, ultimately arriving at Castle Proserpina. Thanks to their combined efforts, Elizabeth and Drolta were defeated and Dracula's resurrection was prevented. Dracula's resentful spirit faded from Europe, having been driven back to his dark netherworld.[1]

Eric would later find a new love and she bore him twin daughters in 1923.[4][5] Stella, the firstborn, would inherit Eric's physical prowess, while Loretta would inherit his magical gifts. Though neither took up the Alucard Spear, they were trained in the ways of the Lecarde family and learned the ritual that was needed to unlock the full power of the Vampire Killer. Even knowing that they would be well-trained as warriors, Eric could be somewhat overprotective of them.

After the battle against Dracula in 1917, John had taken an unusual amount of time to recover. Using magic, he and Eric were able to discover that it was Vampire Killer itself that interfered in his healing. If the wielder was not a direct male-line descendant of the Belmont Clan, the whip used up some of the life force of its user in exchange for using its full power. Even knowing the cost, John continued to use the whip, but prior to his death he made Eric promise never to tell his son Jonathan how to awaken its full power.

Events of Castlevania: Portrait of Ruin

In 1944, a vampire named Brauner had assumed control of Dracula's Castle, which had resurrected due to the fury and anguish of those killed during World War II. Eric went to investigate the castle's reappearance, but was defeated by Brauner. Around the same time, Stella and Loretta had come to the castle to search for their father, despite Eric's instructions not to follow him. Eventually, they found a badly injured Eric, but were ambushed and turned into vampires by Brauner. Eric was then killed by Brauner. However, Eric was able to bind his spirit to the castle as he died, his will being strong enough to avoid being controlled or warped by its power. He then waited for other hunters to come to the castle, so that he may provide assistance to them with defeating Brauner.

Soon after, Jonathan and his childhood friend Charlotte Aulin, a spellcaster descended from the Belnades Clan, came to the castle to investigate. When they came across Eric's spirit, he introduced himself as Wind, not wanting to reveal his true identity to them. He lent them his aid by teaching Jonathan new fighting techniques and Charlotte new spells, occasionally providing new equipment, and by providing information about Brauner.

After Jonathan and Charlotte discovered a locket containing a picture of Stella, Loretta and Eric himself, he admitted that they were in fact his daughters, and that he was, in fact, the same man who had fought alongside Jonathan's father in 1917. He explained to Jonathan the true nature of his father's death, and why John had not trained him completely. He also eventually gave him the spear that Alucard had given to him.

His daughters were eventually restored to human form by Charlotte, who was able to perform the Sanctuary spell - a purification spell that even Eric was unable to learn in life. They then enabled Jonathan to unlock the power of the whip via a battle with the memory of the last Belmont who wielded it: Richter Belmont. After Brauner and Dracula were defeated, he bid his daughters farewell and departed to the afterlife.

Eric appears as an alternate selectable player at the beginning of the game, in contrast to the more traditional whip-wielding John Morris. He uses the Alucard Spear (called the Alcarde Spear in the English instruction booklet), which can power up like the whip and allows him to pole vault to great heights. 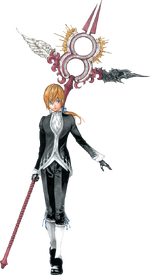 Galamoth plots to send the Time Reaper from 10,000 years in the future into the past to destroy his rival, Dracula and change history. A man named Aeon discovers this and pulls together champions from different eras of history into a dimensional rift, in order to find a chosen one capable of destroying Galamoth's servant. Eric is one of these warriors.

In 1907, on one of his outings, he entered a time rift and there met Aeon, who told him that place was where he would find what he desired - provided he could pass certain tests. Glad to finally have a chance to prove himself better than any legendary Belmont, Eric readily agreed. On his journey, he met Alucard, who reiterated that the spear was not meant to be used beyond supporting the whip. Eric defeated him to prove him wrong. He also faced Trevor Belmont, and believed that defeating him proved the spear to be superior to the whip. He faced Maria Renard, who was famous in her time for having a power that rivaled or surpassed that of a Belmont, and upon defeating her believed he was more than ready to defeat Dracula on his own.

Eric appears as a young effeminate boy with blond hair in a ponytail, dressed in a formal outfit. He is armed with his traditional Alucard Spear. Oddly enough, he is the only character to not have any metal on his outfit.

Eric's age at the time of his death was given as 50 in the instruction booklet of Castlevania: Portrait of Ruin.[6] As Eric's year of birth is stated to be 1892 in the character select screen of Castlevania: Bloodlines, this would place his death in 1942. However, this is impossible as the intro of Portrait of Ruin states that Dracula's Castle was revived in 1944. The reason for this discrepancy is possibly because Eric's character biography from an internal Konami document gives his age as 23 at the time his fiancée was killed by Elizabeth and he became a vampire hunter (this is almost certainly a mistake as Eric's age in 1917 is 25 according to both the game's instruction booklet and the document itself).[1] If Eric's age was mistakenly assumed to be 23 in 1917, that would explain why his age in 1944 is stated to be two years less than it should be.

Origins of the Alucard Spear

Eric's weapon is referred to as the "Alcarde Spear" in the character select screen of Castlevania: Bloodlines. No further elaboration about its origins or its possible connection to Alucard —to whom its name bears a strong resemblance— is given in the game or the instruction booklet; however, an internal lore document, shared by Konami's Chicago offices to Electronic Gaming Monthly, further delves into these topics. The following is written:

"Nobody knows where it came from. But influential opinion is as follows; In the end of the 15th century, Urado Zepeche[sic](Dracula)'s head was chopped off by the spear and they put the head on that spear to expose it before the castle gates until it got rotten.

It's not sure either that it has something to do with Alcarde[sic] who fought with Ralp C. Belmonde[sic] in the first Dracula subjugation."

It's not clear why no definite connection is made between the spear and Alucard. One possibility is that the spear's name originally wasn't meant to refer Alucard, but instead to "alcalde", a Spanish term used to refer to an administrative and judicial head of a town or village. In Japanese, Alucard's name is written as "アルカード", and one possible way to write the word "alcalde" is "アルカルド". Thus, the spear's later connection to Alucard might have been accidental.

In the English instruction booklet story for Castlevania: Bloodlines, Eric is said to be a childhood friend of John, and to have witnessed the death of John's father, Quincy. The name of his love interest is also stated to be Gwendolyn instead of Lucy Seward. However, these facts are missing in the Japanese and European booklets.

Português do Brasil
Community content is available under CC-BY-SA unless otherwise noted.
Advertisement