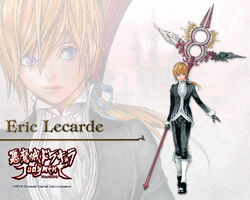 Not content with his bestowed destiny, Eric's goal during his quest in the time rift is to prove (mostly to himself) that the Alucard Spear can be more than just a supplement to the Vampire Killer whip. To accomplish his goal, Eric challenges Alucard, the spear's original creator, the legendary Trevor Belmont, and even Maria, whose powers are perceived to surpass the whip's power. Through systematic victories over his opponents, Eric becomes confident enough that both the power of the spear and his own skill are a match even for the likes of Dracula.

Retrieved from "https://castlevania.fandom.com/wiki/Eric_Lecarde/Judgment?oldid=108708"
Community content is available under CC-BY-SA unless otherwise noted.