For the Aria of Sorrow enemy, see Evil Butcher.

The Evil Butcher is a boss in Castlevania: Lords of Shadow. He is a monstrous hulking cook who guards the Bernhard family's castle kitchens.

The Evil Butcher is a monster of unknown origin. It has somehow become the 'official cook' for the vampires living in Bernhard Castle. The Dark Mistress Carmilla uses the Evil Butcher to feed the Ghouls, Wargs and other creatures that live within the castle grounds.

He carries a huge iron cleaver as his main weapon. He is not really a fighter but is dangerous and skilled with the tools found in his kitchen. However, due to his size, he needs constant 'refueling' in order to maintain his stamina.

Gabriel first encounters the Evil Butcher when he enters the castle's dining hall. The butcher drops human body parts on a golden plate before ringing a bell and then leaves the room. The bell opens up several vents, releasing Ghouls into the room. Gabriel repeats the same procedure to get into the vent and sneak into the kitchen, where he battles the creature.

After a while, the creature drinks a glowing liquid in a pot and then puts it over his head. Gabriel hits the pot stunning the creature, allowing him to grab it and start a finishing combo. 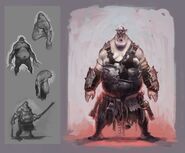 The Evil Butcher drinking the glowing liquid from the pot

Retrieved from "https://castlevania.fandom.com/wiki/Evil_Butcher_(Lords_of_Shadow)?oldid=287674"
Community content is available under CC-BY-SA unless otherwise noted.