Curse of Darkness
The Evil Core is an enemy in Castlevania: Curse of Darkness. It is a core of evil made from hatred, envy, anger, and other dark emotions. It sucks the life out of anyone nearby.

The Evil Core is a hideous monstrosity resembling an unborn demonic fetus. These creatures can be found in the basement area of Garibaldi Temple, which can only be accessed after gaining the Devil-Type Innocent Devil and using its Magic Circle ability to slide under a cracked wall located in the far leftmost room of the first floor. These enemies only inhabit the long corridor that leads to Legion.

Evil Cores are surprisingly powerful. If one manages to make contact with the player, it will paralyze them and start sucking their life force by dealing continuous attacks until it detaches. Dark Crystals can be stolen from them and they very rarely drop the Miracle Egg material. This is an extremely rare drop, however, and incidents of gamers having to kill hundreds of Evil Cores just to find one of these have been reported.

They are good for leveling up young Innocent Devils, as they normally drop three Evo Crystals and are worth a lot of EXP.

Evil Cores open their stealing window when attacked and also randomly on their own. However, because Steal is bound to the same button as Final Attack, most stealing attempts may chain into a final attack instead. A workaround consists in hitting them once, immediately open the menu and unequip Hector's weapon, return to the game and steal as soon as he's back on the field. 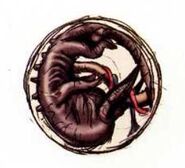 Unused portraits of Evil Core from Curse of Darkness

Isaac's room, where the second battle takes place.
Add a photo to this gallery

Retrieved from "https://castlevania.fandom.com/wiki/Evil_Core?oldid=291077"
Community content is available under CC-BY-SA unless otherwise noted.