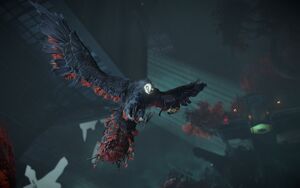 A Familiar (使い魔, Tsukaima?) is an eidolon summoned by the player. Familiars can take many forms, such as bats, ghosts and imps, among many others, or they could be formed from the souls of captured enemies. Their most common purpose is to provide the player with support skills. Some familiars may also use special attacks to assist the player in combat.

Castlevania: Symphony of the Night marks the first appearance of any such summoned creature in the Castlevania series.

Alucard can summon five Familiars by locating card relics scattered throughout the game's two castles. Only one of these may be active at any time during gameplay. They include:

The Faerie Card can be found in the Long Library. It is located at the top left door of the largest room. This room can be reached by changing into a bat or by jump kicking off of Spellbooks after acquiring the Leap Stone.

The Bat Card can be found in the room where Slogra and Gaibon were fought at the beginning of the game. It is in the upper right corner of the room and can be reached either by using Form of Bat or by double high jumping to reach it.

The Sword Card can be found in Olrox's Quarters. Take the lower left door in the large room with the fountain. In this hallway, that leads to the Royal Chapel, find the breakable ceiling and go up.

In the Japanese and The Dracula X Chronicles versions, there's also a Nose Demon Familiar and a Fairy Familiar, in addition to the pre-existent Familiar types.

The only familiars used by Soma Cruz in this game are:

Soma Cruz can summon familiars after absorbing certain enemies' souls. All of them are Guardian Souls.

Creatures that aid Hector in Curse of Darkness are not called "familiars" but instead Innocent Devils. 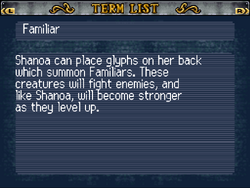 Shanoa may summon the aid of some creatures by equipping certain glyphs on her back. These familiars vary greatly in speed, attack power, aggressiveness, and may even inflict status ailments to enemies, such as Poison or Stone.

Each familiar can be leveled-up up to three times by absorbing more glyphs of the same familiar type. They can also level up by letting them kill enemies, although this process is much slower.

They reach Level 2 at 32,767 XP and max out at 65,535 XP, which is Level 3 (the message "LEVEL UP" will appear onscreen when a new level has been reached). Unfortunately, there's no in-game way of checking how much experience a familiar has gained. They gain 3 XP for hitting an enemy and they gain 2,000 XP when Shanoa absorbs another copy of their own glyph.

So, according to this math, it takes 17 copies (rounded up from 16.38 and not taking into account enemies hit/killed by the familiar itself) of the glyph to grow one level. If the familiar is onscreen at the moment it gains a level, it will not immediately display its new abilities; it must first be sent away and summoned again.

Soma Cruz is the only character able to utilize familiars in Harmony of Despair. He has a wide variety of familiars, including several "Retro" familiars to this game.

Retrieved from "https://castlevania.fandom.com/wiki/Familiar?oldid=251376"
Community content is available under CC-BY-SA unless otherwise noted.