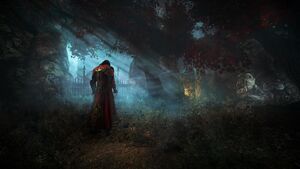 Forests are almost always traversed before entering Dracula's Castle, with the exceptions being Rondo of Blood, Chronicles, in which the castle is exited at certain points, and Portrait of Ruin, in which the two forest areas are featured as paintings instead.

Forests are usually straightforward areas in the games in which they appear - they do not present many traps, aside from the occasional pitfall. Forests often are mixed in with other types of environments as well, though, which may provide further challenges, such as cemeteries or swamps.

Being an area which Dracula doesn't maintain a strong foothold over, most of his more powerful servants do not reside in the forest. Instead, forests are usually filled with basic enemies - basic undead creatures, natural forest-residing animals such as owls, and some monsters spawned of plant life itself.

Retrieved from "https://castlevania.fandom.com/wiki/Forests?oldid=264012"
Community content is available under CC-BY-SA unless otherwise noted.