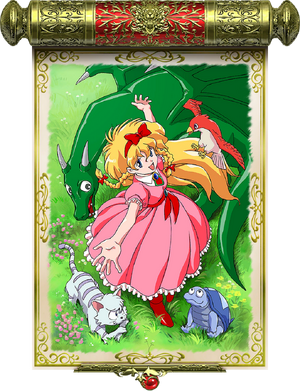 Maria Renard is able to call upon the power of the Four Sacred Beasts (also known as the Four Symbols), which were awakened after she was captured by Shaft in Castlevania: Rondo of Blood. These beasts represent the four points of the compass; they are Genbu (Xuan Wu, the black tortoise), Byakko (Bai Hu, the white tiger), Seiryuu (Qing Long, the azure dragon) and Suzaku (Zhu Que, the vermilion bird).

These creatures can be used as sub-weapons (which sometimes can item crash), summoning spells or special attacks, depending on the game. When used as sub-weapons, these beasts appear as small animals which may have an associated elemental attack (Byakko is an electric cat, Seiryuu is an ice dragon, Suzaku is a fire cardinal, and Genbu offers a protective turtle shell). When used as an Item Crash, these animals can be quite large.

In the PlayStation and XBLA version of Castlevania: Symphony of the Night, Maria is shown calling upon the four spirits in order to aid Richter Belmont in order to grant him strength in his battle against Dracula in case his health meter runs out. In the Sega Saturn version of the game, she is able to use this spell to grant herself invincibility for a time. She can also has a summoning spell for each Holy Beast. Summoning Byakko produces a massive flame attack. Summoning Suzaku grants her use of an Owl Familiar. Summoning Seiryuu calls forth a massive dragon which can be controlled. Summoning Genbu heals some of her health.

Maria plays completely differently in The Dracula X Chronicles version of Castlevania: Symphony of the Night than she did in the Saturn version. In this version, she uses the Holy Beasts as sub-weapons like in Castlevania: Rondo of Blood (Cat, Cardinals, Dragon and Turtle). She equip two of these beasts and switch between them at any time. The beasts can also be item crashed for a more powerful attack.

The sacred beasts appear as elemental animal sub-weapons in this game, but cannot be item crashed.

Suzaku from the Sega Saturn version of Symphony of the Night

Phoenix from Portrait of Ruin

Byakko from the Sega Saturn version of Symphony of the Night

Byakko from Portrait of Ruin

Holy Dragon from Portrait of Ruin

Genbu from the Sega Saturn version of Symphony of the Night

Genbu from Portrait of Ruin

Retrieved from "https://castlevania.fandom.com/wiki/Four_Sacred_Beasts?oldid=276718"
Community content is available under CC-BY-SA unless otherwise noted.