The Frog and Toad are enemies in the Castlevania series. Frogs are said to be a sign of ill omen, while toads are referred as being the result of a demonic ritual gone wrong.

The first time a frog-like enemy made an appearance in Dracula's Castle was the Tadpole boss in the Konami mascot game Konami Wai Wai World, which features levels of several different Konami franchises. This enemy appears as a giant frog with one eye, hopping about the place and attacking with its massive tongue. This is the only boss in the "Castlevania" stage the player has to defeat (the player can even skip past Dracula). It guards the key needed to rescue Simon Belmont. This was also the only time where a frog-like enemy was a boss.

An endless supply of Toads (described as "Mad Frogs") sprung hopping about in the swamp areas of Castlevania III: Dracula's Curse. They reappeared in the swamps of Castlevania Chronicles and in the caves of Castlevania: Symphony of the Night. Rather than infinitely spawning, these Toads are placed in specific locations like any other normal enemy.

Appearing often alongside Toads are smaller and faster Frogs. Introduced in Super Castlevania IV, they are difficult to hit and can leap fairly long distances. They later reappeared in Castlevania: Rondo of Blood and Symphony of the Night, where they had the ability to strike with their tongues.

After a relatively long absence, Frogs and Toads made a return in Castlevania: Portrait of Ruin, where Charlotte Aulin gains the ability to turn either herself or Jonathan into a frog, gaining with this access to hard to reach areas.

The only appearance that frogs have made in a 3D Castlevania game is as a critter in the background of the Dead Bog in Castlevania: Lords of Shadow.

The Tadpole from Konami Wai Wai World makes a cameo in a minigame in Tokimeki Memorial 4. 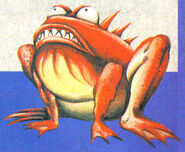 Retrieved from "https://castlevania.fandom.com/wiki/Frog?oldid=254116"
Community content is available under CC-BY-SA unless otherwise noted.