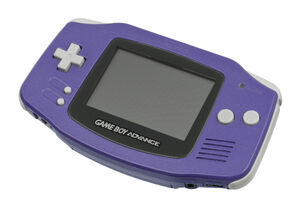 The Game Boy Advance (often abbreviated as GBA) is a handheld video game console developed, manufactured and marketed by Nintendo. It is one of the latest in the Game Boy series of consoles, and the successor to the popular Game Boy Color. It was released in Japan on March 21, 2001; in North America on June 11, 2001; in Europe on June 22, 2001; and in China on June 8, 2004 (excluding Hong Kong). Its code name during development was "Project Atlantis".

Retrieved from "https://castlevania.fandom.com/wiki/Game_Boy_Advance?oldid=301319"
Community content is available under CC-BY-SA unless otherwise noted.