Dark Palace of Waterfalls
Anti-Soul Mysteries Lab
The Garden Forgotten by Time (刻忘れし庭園 –Forgotten Gardens–, Toki Wasureshi Teien?, lit. "Forgotten Gardens") is a location in Castlevania: Lament of Innocence. This area comprises a series of gardens and other outdoor areas connected by long corridors which eventually lead to the castle's greenhouse. As expected, plantlife thrives in this area. In addition, many enemies have the ability to induce Poison status.

Medusa is the boss of this stage and she awaits for anyone who dares to step into her lair to turn them into a magnificent stone statue.

This stage is conformed mainly by long corridors that connect big gardens and other outdoor areas between each other. Marble statues and carved imagery decorate most of the walls present here. Near the center, four larger gardens can be found, where a new pesky enemy is introduced: the Gargoyle, which is quite agile and has the ability to turn enemies into stone.

In a couple of rooms, Man-Eating Plants will appear. The player should take note of not killing them right away, though, as they are key to reach a few secret locations in the level. Every time they're attacked, they'll be pushed slightly backward and when they have sustained enough damage, their petals will open revealing their pistil, which is their weak spot. Their main purpose may be not so obvious at first, though; when they open, their petals can be stepped upon without sustaining damage. The player must then lure and/or push them near one of the ledges "hidden" high above the rooms where they appear in and make them open to use them as stepping platforms.

Other enemies the player must be aware of are the Evil Stabbers, who have the ability to "dive" into the ground and move around freely and at great speed while pulling out their long claws, making them both, very dangerous and invincible at the same time.

A big outdoor area with a fallen bridge can be found soon after reaching the eastern part of the level. A Heart Max Up is partially hidden at the base of a minor tower near the back wall. At its top, there's a ledge with another door. However, it can't be reached by normal means. The player must first equip and activate the Wolf's Foot relic and double jump toward it from the still standing part of bridge nearby, then latch their whip to the pole in midair to pull themselves up.

The other door (the one at the end of the bridge) leads to a very tall tower. If the player continues deviating from their main path and instead decides to explore it, at the top they'll be able to confront the Thunder Elemental. With his defeat, Leon will gain possession of the Whip of Lightning.

Further on, Leon will reach the greenhouse of the castle; four rooms connected and arranged in a 2x2 layout. It's worth mentioning that one of the doors is blocked by a fallen palm tree. Fortunately, a gate can be found just to its right to access the next room. This gate is a bit hard to discern from the rest of the background at first, though, having made more than one adventurer wander aimlessly through other parts of the stage in search of a mean to remove the palm from the door.

Eventually, Leon arrives to an empty room where he is welcomed only by the silent statues of various sphinxes arranged around its walls, with what appears to be no other option than to leave and look for another way. However, these statues can be destroyed and a secret door can be uncovered behind one of them.

Soon, Leon arrives to a big arena where the statues of various warriors from different eras are scattered about. His attention, however, immediately falls upon a grotesque stone bust of the legendary monster, Medusa. The head suddenly comes to life and greets him, detaching itself from its neck and flying forward, marveling at how Leon's body would make an excellent statue. Leon then realizes that the rest of the statues are in fact the petrified remains of prior adventurers who confronted her. A battle between them then ensues.

Leon emerges victorious and Medusa's agonizing head utters her last words, astonished by the power of Leon's whip and pointing out that it wasn't that powerful before. She asks him if the whip has already gained its complete form, to which Leon seems oblivious about what she's talking about. 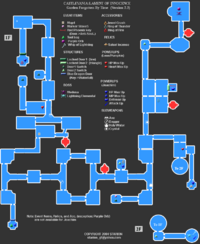 Retrieved from "https://castlevania.fandom.com/wiki/Garden_Forgotten_by_Time?oldid=324270"
Community content is available under CC-BY-SA unless otherwise noted.