The Gargoyle is an enemy in the Castlevania series. They are living statues of grotesque monsters that boast the wings of a bat, made either of terra-cotta, marble, or granite. In some instances, they are referred to as demons turned to stone. They act as watchers to prevent trespassers from wandering into the castle.

In architecture, a gargoyle is a carved or formed grotesque with a spout designed to convey water from a roof and away from the side of a building, thereby preventing rainwater from running down masonry walls and eroding the mortar between. Gargoyles are usually an elongated fantastic animal because the length of the gargoyle determines how far water is thrown from the wall.

A French legend that sprang up around the name of St. Romanus, relates how he delivered the country around Rouen from a monster called Gargouille. The Gargouille is said to have been the typical dragon with bat-like wings, a long neck, and the ability to breathe fire from its mouth. In each version of the story, the monster is led back to Rouen and burned, but its head and neck would not burn due to being tempered by its own fire breath. The head was then mounted on the walls of the newly built church to scare off evil spirits.

Gargoyles are flying, anthropomorphic, reptilian-like demons who are usually found as stone statues decorating some structures in the Castlevania universe. These will come to life and attack as soon as the player approaches them. However, not all statues will reanimate in such cases, and sometimes they will wait until the player performs a particular action.

Not all gargoyles appear in their stone form. Depending on the game, they can appear already flying and attacking. Some of them will swoop at the player, while others will come armed with spears which they may hurl at them and then continue on their way.

The first game where gargoyles appeared in their stone form was in the Aqueducts stage from Castlevania: Rondo of Blood.

In the US instruction booklet of Simon's Quest, the Devil was renamed as "Gargoyle", perhaps because of Nintendo's policy of not including either religious or explicit content in games distributed for their console at the time.

These enemies only appear inside of mansions. They attack by walking and jumping sporadically at Simon, while shooting a pair of fireballs from their mouths at an angle. The first time the player encounters one is while making their way out of Berkeley Mansion. The recently acquired Dracula's Rib will prove to be very useful in deflecting the fireballs shot by this enemy.

A swarm of Gargoyles (originally named "Ogideran" in the X68000 version) can be seen flying in the background of the Underground Aqueduct. The player will be able to see their formations while this happens, so they can be prepared for when they arrive to Simon's position. This time they come armed with spears and will attempt to stab him once they arrive.

Gargoyles appear in the second section of Stage 2' in Rondo of Blood, being the first time they appear in stone form in the series. When approached, they will suddenly come to life from their statuesque condition and start attacking. They die in a single hit; however, they can be very hard to defeat as they will dodge most of the player's attacks. They appear to be oblivious to sub-weaponry, though, so a well aimed Axe or Seiryuu will be enough to dispose of them. If not dealt quickly enough, they will spit three fireballs in a spreading manner.

After a long and intense battle through the Leaning Tower of Pisa, the player will eventually encounter this menacing creature at its top. The Gargoyle attacks either with tail swipes, shooting projectiles from the tip of its tail, or by making flying passes. When low on health, it will start bouncing around the top of the tower in an attempt to land on the player or knock him off to his doom. Once it is defeated, it will rise one last time into the air and let out a shrilling scream as it explodes into pieces.

This boss makes a second appearance as part of Death's boss battle toward the end of the game, in a roulette-style card game prior to fighting Death himself.

Various enemies in this game have the ability to turn Alucard to stone, but an interesting peculiarity of this status is that sometimes he will be turned into a big gargoyle statue. While there seems to be no rhyme or reason as to when it will exactly happen, Alucard does become immune to damage while in this state.

Gargoyles are encountered quite early in the game and are a frequent enemy throughout the rest of it. They are just a stronger version of Gremlins and attack in very much the same way. They usually appear flying from one edge of the screen to the other and come armed with spears, which they may hurl at Nathan.

In some parts of the castle, they can also be found in statue form until approached.

Gargoyles are again a stronger version of Gremlins and attack in exactly the same manner, by flying and making swoops at Soma.

Gargoyles are first introduced in a little cutscene in one of the courtyards of the Garden Forgotten by Time. They have low health but can be a bit difficult to defeat due to their erratic flying patterns and their evading maneuvers. They can be found either in stone form or already flying, and can become a nuisance as they will do both, attack relentlessly and/or provide supportive offense while Leon is occupied dealing with other enemies.

They have three attacks:

In Order of Ecclesia, Gargoyles can be first found in the Castle Entrance, where they appear in statue form. They usually come to life and start to attack as soon as Shanoa approaches them. However, in some cases the player first needs to perform a specific action for them to attack. Being that they are made of stone, they are weak to Strike damage, so using a Macir glyph against them is recommended.

The Gargoyle's sprite was used as base for a later enemy: Draculina. 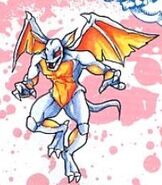 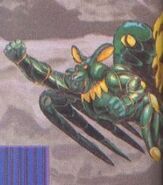 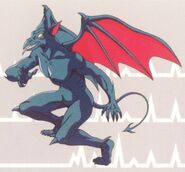 Gargoyle from the Japanese Rondo of Blood instruction booklet

Gargoyle Lv. 15's enemy list entry from the Sega Saturn version of Symphony of the Night

Gargoyle Lv. 25's enemy list entry from the Sega Saturn version of Symphony of the Night

Gargoyle Lv. 35's enemy list entry from the Sega Saturn version of Symphony of the Night

Gargoyle from Mirror of Fate

Retrieved from "https://castlevania.fandom.com/wiki/Gargoyle?oldid=282253"
Community content is available under CC-BY-SA unless otherwise noted.