"I, too, have things I must do within these castle walls."
— Genya Arikado, in the prologue of Aria of Sorrow

Genya Arikado is a member of a top-secret Japanese government agency. He was quick to inform Soma Cruz that he must reach the throne room when he finds himself mysteriously trapped inside Dracula's Castle, which has been sealed by a solar eclipse. Arikado is a frequent visitor to the Hakuba Shrine and an associate of Yoko Belnades.

Arikado makes recurring appearances in Aria of Sorrow. There, he tries to provide helpful information to Soma Cruz while he roamed around the castle.

At the start of the game, Arikado appears at the entrance after Soma awakens and Mina introduces them to each other. Arikado then informs Soma that they are currently in Dracula's Castle, which is located inside the eclipse. However, before he can explain the situation further, they are attacked by a group of Skeleton Knights and Winged Skeletons. Arikado manages to kill most of the monsters using his power; however, one of the Winged Skeletons manages to avoid Arikado's attack, allowing it to attack Soma and Mina. Fortunately, Soma uses his pocket knife to kill it, somehow gaining the power of the monster's soul in the process. Arikado reveals that Soma has awakened the power to absorb the abilities of the monsters he kills and tells Soma to go to the Master's Chamber in order for him and Mina to leave the castle. Arikado places a protective barrier around the entrance, creating a safe place for Mina and allowing Soma to explore the castle without worrying about her safety, though points out that despite the barrier, death will most certainly find those that stay in the castle for too long and only Soma can save her from a painful death.

If Soma talks to Mina after this, he will ask her about Arikado. She tells Soma that she heard that Arikado does something related to national intelligence and explains he has been coming to Hakuba Shrine for years. She also tells Soma that Arikado is an unusual man who's face has not changed or aged in the 10 years she has known him.

Yoko Belnades mentions him when she first meets Soma, though at first she refers to him by another name before correcting herself, hinting that Genya Arikado is an alias, though Soma does not seem to notice. Yoko explains the reason Arikado is looking after him is due to them sharing the same dark powers.

After Yoko is stabbed and injured by Graham Jones in the Underground Reservoir, Arikado arrives and tells Soma he will tend to her wounds while Soma deals with Graham, who has gone to the Master's Chamber. If Soma goes back to the entrance after this, he will find that Arikado has left the injured Yoko there with Mina and Hammer after treating her injuries.

If Soma manages to defeat Graham in the chamber with the three souls that represent Dracula's powers (Flame Demon, Giant Bat and Succubus), he will discover the true nature of his power and calls for Arikado to show himself. Arikado will tell Soma to travel to the Chaotic Realm and defeat Chaos.

Before the fight with Chaos, Arikado joins his powers with Mina, Hammer, Yoko and Julius Belmont to contact Soma and encourages him to defeat the foe.

After Chaos is defeated, Arikado congratulates Soma for defeating it before commenting that in the future someone may follow in Dracula's dark footsteps and perhaps they will meet again at that time. Arikado bids farewell to Soma and thanks him in his mother's name.

Genya Arikado makes yet another appearance in the sequel of Aria of Sorrow. When Soma is attacked by Celia Fortner, Arikado shows up to assist him. However, Celia erects a barrier, preventing him from using his powers to help Soma. Arikado manages to throw Soma a pocket knife to defend himself. Soma defeats the monsters and is surprised when he absorbs their souls. After Celia retreats, Arikado explains that Soma's Power of Dominance never actually left him and that his powers simply appeared as a result of Celia's attack. Arikado explains that she is part of a growing cult that is planning to create a new Dark Lord. He assures Soma that he and his colleagues will handle the situation. However, Soma is not willing to be left behind and with Hammer's help, he manages to find Celia's headquarters, which is a replica of Dracula's Castle. Soma later meets Yoko and Julius, who explain that they arrived there following a tip from Arikado.

Later, at the Demon Guest House, Arikado angrily confronts Soma for defying his orders. Soma is surprised to see Arikado, who was supposedly protecting Mina, to which he explains that he left Mina's protection to his subordinates. Soma inquires as to why he is still treating him as if he was still the Dark Lord, to which Arikado responds that because he is Dracula's reincarnation, he is still considered to be potentially dangerous. However, Arikado admits that since Soma is already at the castle, he can't really stop him and allows him to remain, albeit under his supervision. Soma thanks Arikado for letting him help and the latter gives him a letter and a special Talisman from Mina. After he reads Mina letter, Soma explains to Arikado what he had learned about Celia's plans. Soma tells him he will continue on his way to reach the top floor and Arikado tells him that meanwhile he will work on tracking down Dario's whereabouts.

If Soma defeats Dario, Arikado will appear to warn Soma to get away from Dario as he loses control of Aguni's power and is consumed by fire. Arikado explains that Dario couldn't resist the demon as it had fused with his soul. He goes on to explain that Dario's life could have been saved if the demon was cut free of his soul. Soma asks what happen to Celia and Arikado explains that she has escaped and he has his men tracking down her whereabouts. As Arikado and Soma are leaving the Castle, Soma stops and Arikado asks what is wrong, only for Soma to say it is nothing and that he just felt something odd for a moment. Arikado asks if anything odd happened in the Castle and Soma tells him about Dmitrii's soul going into him like a monster's soul when its under domination. Arikado says they will have to investigate the matter further, before telling Soma they need to meet Yoko and head for the Church. Soma asks if something is happening to him and Arikado says they will know some enough. Soma and Arikado then leave Celia's abandoned Castle resulting in the Good Ending.

If Soma confronts Celia in the central room of the Garden of Madness after defeating Aguni without wearing Mina's Talisman, Celia will kill Mina and, in his anger, Soma will be consumed by darkness, becoming the new Dark Lord. Arikado, standing at the entrance with Julius, will comment on how they have failed and the Dark Lord has returned, with both men prepared to face the revived Dracula, resulting in the "bad ending".

If Soma confronts Celia while wearing Mina's Talisman, Soma manages to resist being consumed by Dracula's influence long enough for Arikado to arrive and point out that the Mina Celia killed is actually a Doppelganger disguised as her, foiling Celia's plan. However, Dmitrii's soul uses the Doppelganger's body to create a new one for himself and reveals that, while inside of Soma, he managed to copy his Power of Dominance before fleeing with Celia into The Abyss. At the entrance to the Abyss, inside the Mine of Judgment, Soma finds Arikado and Julius waiting for him. Arikado has Julius use his power to open the seal preventing them from accessing the Abyss, although this leaves Julius unable to fight anymore. Arikado and Soma confront Dmitrii as Celia is sacrificed as part of a ritual to increase his Power of Dominance to match Soma's, with Arikado being injured by Dmitrii as a result of the aforementioned sacrifice despite his efforts at preventing Dmitrii from taking control of a calamitous demon. However, Dmitrii is unable to properly contain all of the monsters' souls and they all slowly merge together within him, ultimately forming a single soul with all of their powers combined into an entity known as Menace. Before his death, however, Dmitrii shoves Arikado out of anger and agony when the latter deduced he can't actually control the demons inside him despite copying the Power of Dominance. If Soma defeats Menace, this results in the "true ending", where Arikado comments that if the existence of a Dark Lord is required someday, then one will appear.

In Julius Mode, Arikado appears as a playable character (albeit in his true form as Alucard). Julius Mode acts as a continuation of the game's "bad ending" and deals with what happened after Soma was consumed and became the new Dark Lord. In order to combat the Dark Lord, Arikado releases his true power and becomes Alucard once more. As Alucard, he meets Julius and Yoko in the Demon Guest House and joins forces with them to defeat Soma. They eventually find Soma/Dracula in his throne room in the Abyss and engage him in battle. After defeating Soma, he transforms into True Dracula. After True Dracula's defeat, Arikado stands alongside Julius and Yoko as they watch the castle collapse in silence.

At some point, Genya Arikado got a letter from Lucy Westenra, of the Elgos Order, warning him that the Grimoire of Souls had awakened and that darkness was spreading. He then went over to the Elgos Order's location, although because of the Grimoires venting dark energy, he was forced to fight off several monsters in the vicinity. He then accessed the Grimoire, although because they couldn't directly send him in due to past events, he temporarily assumed his true identity of Alucard. While going through the area, he encountered Death. Although he initially thought Death was a creation of the Grimoire's text, he was subdued by Death, and also learned it was actually the real deal, causing him to suspect that someone was using the Grimoires and had allied with Death. After Lucy summoned Simon Belmont from the grimoire catalogue, the two had a brief quarrel due to Simon mistaking him for one of Dracula's vampires until both Lucy and Genya explained he was actually Alucard. 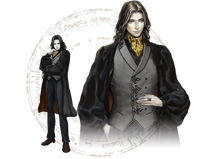 "A mysterious character who belongs to a top-secret Japanese government agency. Currently, only a handful of people know his true identity as the only being with the power to fight against Dracula. While he has unworldly good looks, he is unsociable and difficult to approach."
— Official website description

Arikado's artwork in Grimoire of Souls

Severus Snape
Add a photo to this gallery

Retrieved from "https://castlevania.fandom.com/wiki/Genya_Arikado?oldid=315375"
Community content is available under CC-BY-SA unless otherwise noted.