Getsu Fūma Den (月風魔伝, Getsu Fūma Den? lit. "Legend of Fūma Getsu") is a 1987 Famicom game by Konami starring Getsu Fūma. It was released in July 7, 1987 (in Japan only), which was after the original Castlevania but before Castlevania II: Simon's Quest.

While this game has no sequel, several Getsu Fūma Den-based stages have appeared in other Konami games. These stages are set in Hell and appear in Konami Wai Wai World, Wai Wai World 2: SOS!! Parsley Castle and Castlevania: Harmony of Despair.

Relation with the Castlevania seriesEdit

The game generally follows Japanese mythology, but several enemies are similar to, or are the same as those who appear in Castlevania. Some of them were later re-used in the Castlevania series, such as Shimon, known as "Hellmont" in Harmony of Despair, a parody of Simon Belmont and a Skeleton. 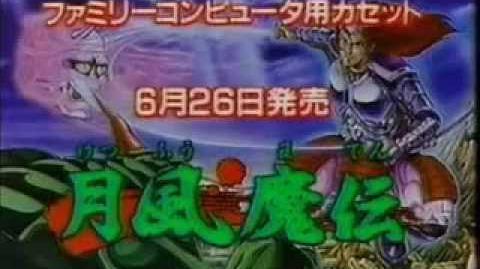 Retrieved from "https://castlevania.fandom.com/wiki/Getsu_F%C5%ABma_Den?oldid=286069"
Community content is available under CC-BY-SA unless otherwise noted.