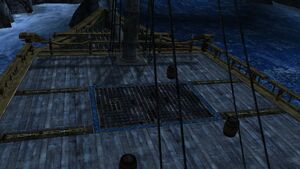 Ghost and Sunken Ships are relatively common environments within the Castlevania universe. The first one appeared in Castlevania III: Dracula's Curse, called "The Haunted Ship of Fools".[1] These locations are generally inhabited by the reanimated corpses of their former crew members, although other times, creatures who have been forever estranged from the surface tend to lurk through their corridors.

Sunken ships are usually found stranded deep below a flooded complex of caves, and most of the times they serve as an access point to another, deeper, area where valuable treasures can be found.

Kalidus Channel from Order of Ecclesia

Kalidus Channel from Order of Ecclesia

Ghost Ship from Judgment
Add a photo to this gallery

Retrieved from "https://castlevania.fandom.com/wiki/Ghost_Ships?oldid=264034"
Community content is available under CC-BY-SA unless otherwise noted.