The Ghostly Theatre (喝采なき奏楽堂 –No applause No performance–, Kassai Naki Sōgaku-dō?, lit. "Concert Hall Without Cheers") is a location in Castlevania: Lament of Innocence.

A richly decorated two-story theater with two extensive wings on each side and a big hall at its center which leads visitors to the building's main stage, where theatrical plays are performed. The audience observes from a row of seats located around the stage, with privileged boxed seats for the most important guests settled on the higher floor. A big red curtain separates the main wooden stage from the backstage and the dressing rooms. The rest of the theater is conformed by various long corridors, minor halls and parlor rooms, where the audience congregates waiting for the next act to start.

When Leon first enters the stage, nothing but silence and solitude will welcome him. Exploring further into the theater, on the west wing, he'll find an ancient scroll which reads: "When the bell tolls thrice under the stage, the curtain will rise." Once he reaches the second floor, he'll coincidentally find a golden bell. If he then returns to the stage and rings it, a cutscene will play with the outcome of him having to battle a succubus. 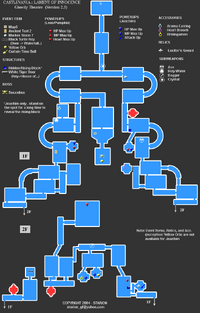 Retrieved from "https://castlevania.fandom.com/wiki/Ghostly_Theatre?oldid=279825"
Community content is available under CC-BY-SA unless otherwise noted.