The Giant Ghost, also known as Skull Lord, is an enemy in the Castlevania series. It is a skull transformed into a giant ghost by exposure to the castle's magic.

A ghost taking the form of a giant skull. It attacks by erratically approaching the player, occasionally pausing before delivering a fast, dashing bite.

First appearance of this enemy in the series, although not yet identified as an individual entity. Instead, Death will adopt this form on the second phase of his boss fight, where he transforms into a giant, phantasmagorical skull that floats in a circular manner across the room while slowly displacing to the left. Once it reaches the edge, it will reappear from the right side following the same pattern. After a fixed period of time, the skull will launch a single scythe at the player, lighting itself from the inside and bursting in laughter as it does so.

The Big Ghost makes an impressive introduction midway through the first section of Stage 3', where the screen suddenly stops scrolling and the monster slowly emerges in the distance, soon arriving to the player's location. It is a phantasmagorical aberration with three eyeballs –two in their respective eye sockets and a third on its forehead– and attacks by hovering around the screen while three smaller Phantom Skulls circle around it. It then slowly homes toward the player attempting to inflict physical damage with its massive size. It can't be harmed by any normal means other than by attacking the eyeballs themselves. Fortunately, each one can be destroyed in a single hit, but due to the ghost's movements and size, this fight can be either extremely easy or considerably difficult, depending on the player's skill and current sub-weapon.

If playing as Richter, bringing the Axe, Cross or Dagger are all good choices. If playing as Maria, Seiryuu is definitely the best option, as a single dragon can destroy all three eyeballs if aimed properly.

The Skull Lord makes an impressive appearance in Symphony of the Night, enriched by the various innovative effects provided by the then new PlayStation system, like a huge sprite size, detailed design, enhanced color palette and impressive lighting effects. It appears in the Clock Tower and the Reverse Keep, and is usually seen among other smaller Phantom Skulls. It is specially weak to Holy, however, and if Alucard managed to get his hands on the Holy Rod beforehand, he may even destroy the Skull Lord in a single hit, depending on his stats.

In Legends, the Skeleton Head floats out of reach and charges to attack when Sonia's back is turned.

The "Skull Lord" version of the Giant Ghost, first seen in Symphony of the Night, can be found lurking in graveyards among many other smaller Ghosts. This time around, it has a ghostly blue aura around it, much like its smaller counterparts.

In addition, the Giant Ghost's dead skull from Rondo of Blood can be found in a background of the Skeleton Cave.

In this version, the Giant Ghost has been reinstated with its third eyeball from Rondo of Blood and also fashions a fiery aura around it. Otherwise, it attacks in the exact same manner as in other versions.

The Great Ghost from Portrait of Ruin is actually a hidden enemy and defeating it is required for completing Wind's "Ghosts of the Desert" quest. Only one appears in the entire game and the only hint the player gets to find it says that "there is a room in which many ghosts gather". To find the Great Ghost, the player must go to the rightmost-bottom room of the upper-right area of the Sandy Grave, where many Ghosts appear, and stay there killing them until the Great Ghost finally appears. It's worth mentioning that the requirement for this quest can be fulfilled even before starting the quest itself; the player may kill the Great Ghost first, and when they talk to Wind to start the quest, it will be already completed.

The Giant Ghost is initially encountered floating in midair and then it starts flying directly toward Desmond (instead of making pauses and short lunges like in other games) as soon as it detects him. It is considerably resilient, so casting a powerful spell is recommended in order to dispatch it quickly.

Like in Legends, the Skull Lord will charge at Christopher when his back is turned. However, it will still move even if Christopher is facing it, although with reduced speed.

Castlevania Puzzle: Encore of the NightEdit 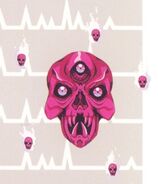 Giant Ghost from the Japanese Rondo of Blood instruction booklet

Retrieved from "https://castlevania.fandom.com/wiki/Giant_Ghost?oldid=287353"
Community content is available under CC-BY-SA unless otherwise noted.