For the beast-like skeleton in the Saturn port of Symphony of the Night called "Skeleton Beast", see Were-Panther Skeleton.

Based on a real extinct species

The Giant Skeleton, also known as Paranthropus, is a recurrent enemy in the Castlevania series, often appearing as a miniboss and rarely as an end of area boss. It is the skeleton of an enormous humanoid being. It carries around an equally gigantic weapon, usually a femur.

Members of this genus are characterized by robust craniodental anatomy, including gorilla-like sagittal cranial crests, which suggest strong muscles of mastication, and broad, grinding herbivorous teeth. However, Paranthropus skulls lack the transverse cranial crests that are also present in modern gorillas.

There is a particular giant skeleton that appears in Castlevania: Aria of Sorrow called the Creaking Skull, and whose original Japanese name is Gashadokuro. In Japanese mythology, the Gashadokuro are spirits that take the form of giant skeletons. They are fifteen times taller than an average person and said to be created from the amassed bones of people who died of starvation.

These yōkai roam after midnight, grabbing lone travelers and biting off their heads to drink their spraying blood. A loud ringing sound is usually heard in the ear of nearby victims, foreboding an imminent encounter.

They are said to possess the powers of invisibility and indestructibility; though Shinto charms are said to ward them off.

The Paranthropus has a predictable pattern of attack:

First appearing in Rondo of Blood, the Giant Skeleton is a mid-boss encountered in Stage 3. It attacks with the same pattern described above and can be defeated with 18 whip strikes. Once defeated, the player is rewarded with a Pot Roast and allowed to proceed to the next room.

In The Dracula X Chronicles, after defeating the Giant Skeleton, the player is able to juggle its skull with the whip, earning 100 points at every eight juggles without letting it fall to the ground.

The Giant Skeleton also appears in Dracula X in the Caves, but unlike its Rondo of Blood counterpart, the player can simply evade it and proceed with the level as normal.

Called Paranthropus in Symphony of the Night, a giant skeleton that throws bones at the player. If at least one "CLEAR" save file is present in the current memory card, the Paranthropus will be able to drop the powerful Ring of Varda (it will become unlocked as its rare drop), a ring that greatly boosts all stats; if no complete save files are present, it will drop Turquoises in its place.

The first Paranthropus can be found in the Colosseum. They appear more frequently much later in the game, in the Reverse Outer Wall.

A gigantic skeleton wielding a bone. This is one of the first enemies the player will face in Castlevania 64 and Legacy of Darkness. It appears twice as a boss in the first level of the game. In the first battle, after defeating it, it will simply run away and jump off a cliff.

The second battle occurs at the end of the level, during which the skeleton will begin falling apart and finally simply crawl after the player until it is killed. A health restoring item can be retrieved from its mouth after the battle.

The Creaking Skull is a massive skeleton that is too large to properly support its own weight, with its legs presumably having crushed long ago due to not having been able to support the entire monster's weight and leaving only its upper body behind. It slowly drags itself forward, periodically pausing to swing its femur or spew a ball of fire at the player. A second one can be found in the basement section of the Dance Hall, where its soul can be gathered.

Gaining dominance over its soul grants Soma the Guardian Big Bone ability, which is the strongest guardian soul (based on its attack power). With it, Soma grows the Creaking Skull's skeletal club arm to fight any enemies behind him. While not technically useful, it can help defeat those enemies that gang up on him, like Fleamen and Rippers, although it can be replaced with other, more powerful, rear-guard souls later in the game, such as the Big Golem or Cagnazzo.

The Creaking Skull is also the only boss found in the mobile version of Castlevania: Aria of Sorrow, with the exception of the end boss, Graham Jones.

The Giant Skeleton is an enemy version palette swap of the Creaking Skull and appears close to the end of the game. It is now colored lime-green. It attacks almost in the same way as the Creaking Skull, by slowly crawling forward and swinging its femur. Unlike the Creaking Skull, it can't spew any fireballs, although its strength makes up for it. Its soul is a short-range projectile where Soma throws giant skulls.

Interestingly, when comparing the two enemies, the Creaking Skull seems to have what looks like a heart shielded inside its rib cage, while the Giant Skeleton doesn't.

The Giant Skeleton appears in Minera Prison Island as the game's second boss. It is not like the other giant skeletons found in the series, as its fighting style is completely different. What makes this fight hard is the fact that the skeleton will bend backward if Shanoa ends up behind it, and it is harder to damage and to avoid when it is in this position. It's also the only boss that can be encountered as a regular enemy later in the game, appearing twice in the same room in Tristis Pass, along with a Mimic. Even with these difficulties, if the player takes full advantage of the Magnes glyph and constantly shoots over it when it looms close, it will be an easy battle.

When it is encountered later in the game, it can be defeated as quickly as a normal enemy. Ignis deals lots of damage per hit, and with multiple hits it will defeat it easily.

The Giant Skeleton has three variants in Order of Ecclesia: 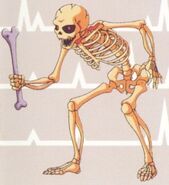 Giant Skeleton from the Japanese Rondo of Blood instruction booklet.

Paranthropus's enemy list entry from The Dracula X Chronicles version of Symphony of the Night.

Giant Skeleton in the official Koma comic strips for Order of Ecclesia.