Kyūketsuki Jiru Do Re
(Gilles de Rais the Vampire)

1844: Legacy of Darkness (as Gilles de Rais and Dracula's servant)

"Worm, you dare oppose the power of darkness? Is it death you seek?"
— Gilles de Rais

Gilles de Rais is a character in the Castlevania series. He is a direct subordinate to Count Dracula. A high-ranked vampire who plays a prominent role in a meticulous plan to bring the Dark Lord back to life.

Gilles de Rais is first seen in the opening scene of Legacy of Darkness as he walks through the castle. Lantern held aloft, he makes his way to the Castle Keep, where Actrise and Death are performing Dracula's 1844 resurrection ritual.

Later, he is mentioned by name in the Villa when Mary Oldrey explains that her husband, J. A. Oldrey, has been turned into a vampire by de Rais. At the end of the level, in the crypt underneath the Villa's garden maze, de Rais fights Cornell. He is surprised by the werewolf's power and escapes with Actrise after she interrupts the battle, although not before both hint that Cornell will make a worthy adversary for their master. Gilles de Rais is present in the final cutscene of Cornell's quest, in which the essence of the werewolf is used in a ritual to reincarnate Dracula in the body of Malus.

Gilles de Rais reappears in Reinhardt and Carrie's quests in 1852, although disguised as Dracula (even though the English versions of these games don't make this clear, the official strategy guide states that "Dracula's servant" is in "Vampire Gildre").[1] Gilles attempts to dissuade the adventurers in the Castle Wall level, and is finally defeated in the Castle Keep.

The first Gilles de Rais boss battle is exclusive to Cornell's quest. In place of him, the player will fight vampire villagers in Carrie and Reinhardt's quests. Henry does not fight a boss in this room.

The battle begins abruptly after Cornell descends the stairs into the Villa's crypt. Sans introduction, de Rais will rush toward Cornell and use any of the following attacks:

Gilles tends to attack at close range, usually using his flame attack only when it's difficult for him to reach Cornell (such as when he is on the entrance steps or atop the casket). Gilles is also adept at evading attacks. He may leap into the air or do a quick sidestep to avoid damage, often attempting to bite Cornell afterward if he is in close proximity. It should be noted that because de Rais is a vampire, his maximum hit points decrease by 20% during the day.

The second Gilles de Rais boss battle (in which he is disguised as Dracula) is exclusive to Carrie and Reinhardt's quests. Cornell has almost exactly the same battle in the Castle Keep, save for the fact that the true Dracula has a few different attacks.

After a cutscene, de Rais will turn into mist and vanish. He may teleport multiple times, eventually reappearing behind the hero before attacking. Also, if the player is too close or turns to face him abruptly, he may vanish again. His attacks include:

In homage to Dracula boss battles of past games, de Rais only takes damage when struck on the head. In higher difficulty settings, the player must actually jump up to hit him at all; otherwise, all attacks miss. Unlike the first fight with him, the time of day does not affect the power of his attacks or maximum hit points. 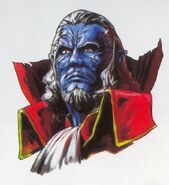 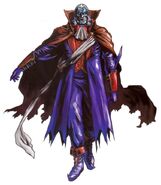 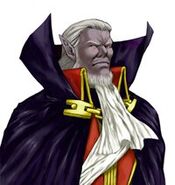 Gilles disguised as Dracula.
Artwork from Legacy of Darkness.