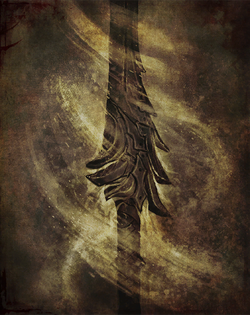 The Glaciem Blade is a sword used in the forging of the Crissaegrim.

Glaciem was the name of a graceful magical rapier that took the lives of thousands of Brotherhood soldiers before being destroyed by one of their paladins. There is no record of its first owner, and even less is known about the master blacksmith, only that it was associated with a terrible curse that fell upon all those who laid a hand on it. Like the icy finger of death itself, the blade drained the vitality from its enemies and injected it into the body of its bearer, making him practically invincible in battle. It was an unmatched power that led its owners to suffer terrible deaths, painful losses and drove its few survivors mad under its influence. Today, its essence is hidden in the metal that makes up the Crissaegrim, and its sharp blade remains in waiting to be called upon once more by its new master.

Between Alucard's final encounter with his father at the end of the events of Mirror of Fate and the five hundred years before their next encounter at the prologue of Lords of Shadow 2, he found the remains of the Glaciem Blade and included them in the forging of the Crissaegrim, giving the sword an icy cut and the ability to heal its wielder by inflicting damage on their enemies.

Retrieved from "https://castlevania.fandom.com/wiki/Glaciem_Blade?oldid=220585"
Community content is available under CC-BY-SA unless otherwise noted.