For the boss called "Gobanz" in Japan, see Death Bat.

Gobanz is a boss in Castlevania: The Adventure.

Gobanz is the first boss in Castlevania: The Adventure, an armored hulking creature that wields a retractable club-like weapon. He advances slowly from one side of the screen, stopping every couple of steps to unleash his weapon for a ranged attack. His armor will reflect any fireballs shot from Christopher's whip (reflected fireballs are harmless to Christopher as well).

He makes a reappearance as a normal enemy in the last stage of the game. 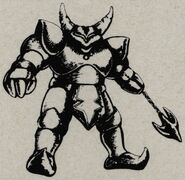 Gobanz from The Adventure instruction booklet

Gobanz from the cover of the Famitsu guide for The Adventure

Retrieved from "https://castlevania.fandom.com/wiki/Gobanz?oldid=287556"
Community content is available under CC-BY-SA unless otherwise noted.