"Godbrand is a viking vampire that loves nothing more than the thrill of the hunt. His passions include killing, having sex and turning humans into boats."
— Godbrand's profile description

Godbrand is an antagonist in the Castlevania animated series. He is a general of Dracula's army; a viking vampire that loves hunting, killing, having sex and "turning humans into boats".[1]

He is voiced by Peter Stormare.[2]

He is a muscular vampire with red hair and pointy ears, a trait of his vampiric form. Although he wears some type of armor with gold trims, his upper chest and one of his shoulders are partially exposed.

Godbrand is a big mouthed viking who enjoys the pleasures of raiders. These pleasures include raiding human villages, killing, drinking blood, drinking beer, having sex, and making boats.

Godbrand imagines himself as being a brutally strong warrior that others bow down to in respect of his might. In truth, he will brashly state his desires but will quickly bow down and become deferential when faced with power or authority. His weak nature is on display when he questions Dracula, speaks with Carmilla, and even in his interactions with Hector and Isaac. Godbrand only lives up to his delusions of grandeur when hunting humans that are physically weaker than himself.

He considers humans to be no more than unthinking livestock. He was initially very excited by Dracula's war, seeing it as a way to reorganize the human race into becoming a larder for the vampires. His prejudice extends to being commanded by humans, but he will still defer to his human leaders if he senses that angering them is a bad idea.

Despite his brashness, he is surprisingly thoughtful in certain respects, and very attuned to the feelings of his fellow vampire generals. He accurately observed that Dracula's war was uncoordinated and demonstrated that he respects organized warfare. He also saw the possible long term effects of the war, realizing that killing all humanity would end his species' food supply and that they would be best served by organizing humanity into pens for consumption. For these reasons, he does not agree with Dracula's ways of plotting the war, and sides with Carmilla's intentions of betrayal.

However, the fact remains that Godbrand is brash, outspoken and socially careless; traits which ultimately cost him his life. He will voice his desires and opinions freely first and consider if this was a bad idea later.

Godbrand nearly angered Dracula to the point of killing him by not heeding his growing irritation at his continuous questioning of the human genocide. He is later killed by Isaac when attempting to convince him to switch sides. He told Isaac of his intentions to betray Dracula without taking the time to assess if he would be onboard with the idea, leaving his guard down afterward before confirming if Isaac accepted his proposal.

In battle, Godbrand wields a sword and an axe. Being a vampire, he has supernatural abilities and powers which include superhuman strength, speed and agility.

Godbrand is vanquished by Isaac
Add a photo to this gallery 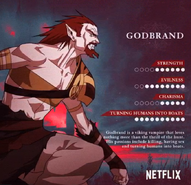 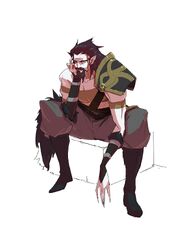 Official concept art
Add a photo to this gallery

Retrieved from "https://castlevania.fandom.com/wiki/Godbrand?oldid=259238"
Community content is available under CC-BY-SA unless otherwise noted.