For the ox-like creature, see Gorgon.

Euryale, Stheno and Medusa are the Gorgon Sisters and they appear in Castlevania: Lords of Shadow 2. The three merged and created the Gorgon titan. 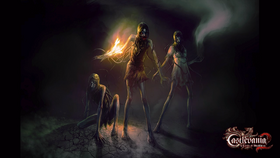 Once three beautiful siblings among the Old Gods. During the fall of Agharta, the three sisters escaped into the deep depths of the earth. They became twisted shadows of their former selves, while retaining the macabre appearances of little girls. Over the many years they have survived by obsessively staying together. Their lair would become part of the City of the Damned under the castle, where they would become loyal followers of their new Prince of Darkness.

Dracula learns from young Trevor that the Gorgons possess his Chaos Claws. Upon finding Euryale, she tells him that the jailers have turned against him. Stheno informs Dracula that Medusa has the claws. Dracula enters the Gorgon's lair, and among the endless petrified victims he retrieves his power. The three sisters unite, only to learn that Medusa has been corrupted by the Castle's blood and infects her sisters as well. The blood takes them in and combines them into a singular mighty Gorgon that battles Dracula.

Retrieved from "https://castlevania.fandom.com/wiki/Gorgon_Sisters?oldid=292110"
Community content is available under CC-BY-SA unless otherwise noted.