"The most agile man in Vallachia."
— Grant's description in Judgment

Grant Danasty (グラント・ダナスティ, Guranto Danasuti?) is one of the protagonists of Castlevania III: Dracula's Curse. He also appears in Castlevania Judgment as a playable character.

In Wallachia, during the year 1476, the populace became disturbed when monsters, who had until that point only been talked about in legend, started to appear in populated areas. According to rumors, they were commanded by a mysterious Count in black known as Dracula.[5] Viewing the situation with great concern, the Eastern Orthodox Church sent out their troops to subdue to the threat. Because he was suspected to be a vampire, a secret team was deployed to find and defeat Dracula.[6]

Around the same time, within Wallachia, a group of rebels were plotting to overthrow Count Dracula. However, they were no match for Dracula's dark powers and the members of the resistance all met gruesome ends. Grant Danasty, a noble thief from Wallachia was among them. He was turned into a demon and was put in the clock tower as a guard.[6]

After receiving no word from Wallachia for some time, the Pope turned to the Belmont family as a last resort. Trevor Belmont stepped forward to end the oppression of Wallachia.[6]

Trevor managed to defeat Grant's cursed demon form after reaching the top of the Clock Tower, turning him back into a human, but retaining somehow the supernatural ability to climb and stick to walls as if he was a spider, and great speed, giving him the nickname of "the most agile man in Wallachia" Grant then decided to go along with him. Together with Sypha Belnades, a witch, and Alucard, Dracula's son, the four heroes fought their way to Dracula's throne room. Through their combined efforts, they managed to subdue him. After the fight, they watched the castle crumble at a nearby mountain cliff. All the monsters disappeared alongside with Dracula and Wallachia was at rest.

Grant is fought as a boss in the Clock Tower. He was turned into a monster due to Dracula's magic. After he's defeated, he can be recruited by Trevor as an ally.

Although Grant does not appear in person, a zombie impersonating him, along with two other zombies impersonating Trevor Belmont and Sypha Belnades, is fought as a boss in Castlevania: Symphony of the Night, encountered in the Reverse Colosseum. He is an evil duplicate made to confuse Alucard.

The trio of zombies from Symphony of the Night return in Portrait of Ruin. They are encountered in the Nest of Evil, a special area where several bosses from previous games can be fought.

Grant is one of three allies that can be recruited in Castlevania III: Dracula's Curse. Grant uses a small dagger to rapidly stab forward. In the Japanese version of the game, he's able to throw them instead, allowing him to be more effective compared to the American version. His usable sub-weapons are the Dagger, the Axe and the Stopwatch. In addition, Grant can climb on walls and ceilings, making it easier for him to traverse the stages and reach areas otherwise unreachable to Trevor.

(A menu appears that says "What will you do?" with the options "Take him with you?" or "Leave him behind?")

If Trevor chose Sypha or Alucard as his partner

(a message appears asking "Accept a partner?" with options "yes" and "no") 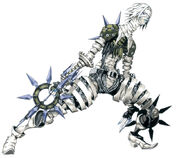 Galamoth plots to send the Time Reaper from 10,000 years in the future into the past to destroy his rival Dracula and change history. A time traveler named Aeon discovers this and pulls together champions from different eras of history into a dimensional rift in order to find a chosen one capable of destroying Galamoth's servant. Grant is one of these warriors.

After Dracula's defeat, Grant devoted himself to rebuilding the towns and villages that had been destroyed. He has feelings for Sypha, and therefore didn't attend her wedding to Trevor, whom he resents.

Grant is mostly shrouded in bandages, has pale skin and white hair, and he wields a circle shaped weapon with daggers attached. He also appears to have spare daggers attached to his wrist. Grant's theme in Castlevania Judgment is Clockwork.

Grant makes a small cameo appearance in Pachislot Akumajō Dracula III. He appears in his 8-bit incarnation during 'Bonus' mode, along with a small description.

Project 51 Productions obtained the rights from Konami to create a movie based on Castlevania. Their planned project was a direct-to-DVD feature covering the story of Castlevania III: Dracula's Curse, with Grant as one of the protagonists. However, the project went on a long hiatus and it eventually came to light in the form of a Netflix animated series, with the first four episodes released on July 7, 2017, and its second season on October 26, 2018. Grant has yet to appear in the series.

Grant is briefly referenced in the animated series. In "Bless Your Dead Little Hearts" (S3E01) Trevor mentions "that one guy with the horse-drawn sailboat on wheels that called himself the Pirate of the Roads...", and Saint Germain comments about "[an] imbecile who put wheels on his boat...".