"I need you to commit to saving these people. Because my life isn't worth living if I can't save theirs."
— Greta in "You Must Sacrifice"

Greta is a character in the Castlevania animated series. She is the head woman of Danesti village and defends it against night creatures.

She was voiced by Marsha Thomason in the English version of the show.

Greta's family arrived in the area that would become Danesti generations before her, escaping from the Romans according to her knowledge. They came to that area back when it was "just a wide spot in the road" and settled it, along with others who would travel from scattered locations seeking a community to call their own. She became the head woman of the town in her time, acting as its leader and commander.

When night creatures began attacking the village seemingly out of nowhere, it was Greta who organized the village's defense and sought to find aid from "The Alucard" in Dracula's castle, which was the nearest location to the village.

When Alucard arrived, Greta made a point of making it clear she wasn't going to let him half-heartedly aid her people, as they were her responsibility and her calling on him fell to her if it went badly. When he affirmed that he was sincere in his offer of aid, Greta decided that Danesti was no longer defensible, and the decision was made to relocate the villagers to Dracula's Castle, which would offer more protection. Along the way, Greta made mention of her ability to sense magic in people and its affiliation as a result of living remotely and closer to nature, and used the opportunity to voice her distrust of Saint Germain, who'd taken up refuge in Danesti recently and traveled with the group. She also made evident her ability to fight, taking out night creatures single-handedly.

Upon arriving at the castle, Greta took to setting up the rest of the villagers. As a settlement was constructed, Greta started going through the castle's pantries, looking for ways to stretch the foodstuffs the villagers brought further, and talked to Alucard about the castle's defense, coming that she hoped the castle doors would keep people away. By nightfall, however, the grounds around the castle were invaded by the vampire Dragan and his armies, following the instructions of Saint Germain in the hope of performing Dracula's resurrection. Greta mounted as much of a defense as possible, which could help to fight the night army, but was forced indoors by the onslaught. Eventually, however, Trevor Belmont and Sypha Belnades were teleported to the castle to aid Alucard, and the three pushed back against the monsters while Greta helped defend her people.

After the armies were defeated and the conspiracy to resurrect Dracula was thwarted by the trio, Greta talked to Alucard and had come to the decision that the Danesti refugees would settle a new village around the castle and the Belmont Hold instead of returning to their old lives.

Greta is a leader, whether it be naturally or through necessity of running such a remote village as Danesti. As the head woman of the community, she has the responsibility of keeping everyone safe and provided for; thus, she is a strong-willed and straightforward woman who emphasizes the priorities of the villagers over everything else. She doesn't hold back on her observations and opinions, such as her blunt breakdown of her views pertaining to both Alucard's arrival at Danesti and her suspiciousness of Saint Germain.

Greta is not just about delegation, though, and will be the first to lead her people in both defense and offense. She will not hesitate to run into battle against night creatures –seemingly without fear– and will throw her weight behind rallying her people into battle.

Before meeting him, Greta was suspicious of Alucard but quickly came to admire him. Greta is impressed by his strength in defending her community and his intelligence. She truly warms to Alucard after seeing his kind behavior with the orphans of her village. Greta and Alucard develop a banter that blooms into attraction throughout Danesti's migration to his castle.

– Greta: I'm not interested in magic tricks and one fight. These people are under my care. Will you stay and defend them for as long as it takes?
– Alucard: I said....
– Greta: I need you to understand. I don't know you. You've been 20-odd miles away for months. You creep around the forest. You've got bodies on stakes outside your weird castle. You're obviously half-vampire and you stink of wine, and you appear to me to be at least half-crazy. But you were the only possible advantage I could think of. I don't need to be impressed by low-key swagger. I need you to commit to saving these people. Because my life isn't worth living I can't save theirs.
– Alucard: All done?
– Greta: Did it work?
– Alucard: Yes.
– Greta: Then I'm all done. Thank you.
- ("You Must Sacrifice") 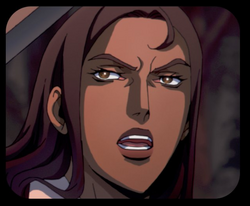 Greta asking Alucard to help her in the Season 4 trailer. 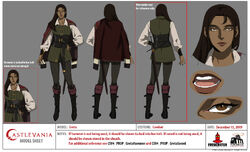 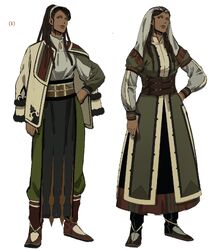