Grabs onto its prey

There are three types of Hand enemies in the Castlevania series. All of them will attempt to grasp onto the player from a different angle of attack, either it is from the ground, from the side while floating, or from the background.

Zombie Hands are found in front of graves and thrust themselves out from the ground to try to grab onto their preys. They cause damage in Castlevania II: Simon's Quest and its LCD version. A similar variant of the Rondo of Blood version was also used in Death's special attack from Judgment.

Appearing only in graveyards or nearby areas. The hands of the reanimated corpses buried there will pull out from the ground and wait for an unfortunate victim to grab a hold onto. They can be specially dangerous as they require many whiplashes to destroy (specially at night) and can deal medium to heavy damage. If Simon decides to jump over instead of destroying them, he can be suddenly overwhelmed by other enemies, like Slimes or Freddies.

Hands start appearing in the Simon's Quest (LCD Handheld) game at the graveyard stage at night, and keep appearing on each subsequent stage. They pull out from the ground and wave around, causing damage. They cannot be destroyed and they impede the player's movement forward, so they must be jumped over.

These types of enemies made their most prominent appearance in Super Castlevania IV, where three variants of them are present:

A group of damned souls' arms, called Dead Man's Hands, flail around on the ground as a trap in Rondo of Blood. If the player is unfortunate enough to be grabbed by these, they will drag them deep underground resulting in an instant death.

The Evil Hands from Circle of the Moon are floating, grasping severed hands. They appear in several areas, including the Eternal Corridor and the Underground Waterway. They inflict only minor damage but they will latch onto Nathan and cause damage over time, in addition to restricting his movements, leaving him open for further damage from surrounding enemies.

The Zombie Hand from the Japanese Simon's Quest manual

The Hand from the Simon's Quest (LCD Handheld) manual

The Claw from the Japanese Super Castlevania IV manual

The Claw from the Nintendo Power Super Castlevania IV Guide 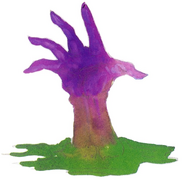 Wall Hands from the All About Akumajō Dracula guide for Super Castlevania IV
Add a photo to this gallery
Retrieved from "https://castlevania.fandom.com/wiki/Hand?oldid=265217"
Community content is available under CC-BY-SA unless otherwise noted.