Most games (see Enemy Data)
The Harpy is an enemy in the Castlevania series. It is a vicious bird-like creature with the head and torso of a woman.

In Greek mythology, harpies would steal food from their victims while they were eating, and also carry evildoers (especially those who have killed their families) to the Erinyes. They seem originally to have been wind spirits. Their name means "snatchers".

Zeus punished King Phineus from Thrace for revealing the god's secret plan by using the gift of prophecy, given to him by Zeus himself. Phineus was blinded and put on an island with a buffet of food which he could never eat because harpies always arrived to steal it out of his hands. This continued until the arrival of Jason and the Argonauts. The Boreads succeeded in driving off the harpies but without killing any of them, following a request from Iris. The harpies returned to their cave in Minoan Crete.

In this form, they were agents of punishment who abducted people and tortured them on their way to Tartarus. They were vicious, cruel and violent, and lived on the islands of the Strophades.

A vicious bird-like creature that has the torso of a woman. Harpies are the most common type of bird people in the Castlevania series. First appearing in Haunted Castle, the Harpy has made herself known for being a quick and tough enemy to beat (and harder in numbers). She replaced the Eagle in her console debut in Castlevania III: Dracula's Curse, where she would drop Gremlins/Ghoul Rabbits. In later games, she holds a dagger in her talons and starts attacking by throwing it at the player. In Castlevania: Legacy of Darkness, she can grasp onto the heroes with her claws and drop them from great heights.

First appearance of Harpies in the series. Near the beginning of the Banquet Room, a dimensional portal unexpectedly opens before Simon and transports him to what seems to be the ruins of a Greek city, where three Harpies ambush him. Once defeated, another portal opens and returns him back to the castle.

One last Harpy appears at the end of the Vampire's Room after successfully crossing the crumbling bridge and just before the battle with Dracula.

Harpies are the first enemies encountered at the Leaning Tower of Pisa. Unlike previous incarnations, they resemble birds more than women this time around. Their plumage is dark green and their heads appear to be covered in feathers in a hood-like fashion. Some of them hold a polearm in their talons and attack by swooping at the player. After being damaged a couple of times, their heads may be cut off and blood will start sprouting out from their necks; this won't stop them, however, and they'll keep on attacking with the same ferocity until defeated.

The Harpy's design from this game would become a staple for future releases, as the same in-game sprite (or some variations of it) were used in following titles. Their hair is green-colored this time around and their plumage is yellow, which would change to orange in some later installments.

Harpies appear in the Clocktower and now they start the fight by throwing the dagger they hold in their talons, followed by either swooping at the player or hurling a barrage of razor-sharp feathers from their wings. They may also grab and carry the player while inflicting damage.

Gaining dominance over a Harpy's soul grants Soma the Wing Cutter ability, which allows him to shoot two razor-like feathers at once, one to the left and one to the right.

Harpies are usually paired with Iron Gladiators or other large monsters, like a Cyclops or a Red Ogre.

They attack in a number of ways:

To steal from them, the player must allow to be carried by a Harpy and attempt to steal as soon as she lets them go. The window of opportunity for stealing is very small, however, and many attempts may be required. Since attacks from other enemies may hinder the process, it's recommended to dispatch of all surrounding opposition first and leave behind only the Harpy intended to steal from.

The Harpy is the boss of the Lookout Tower. 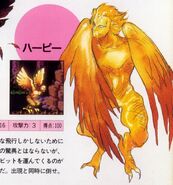 Harpie from the All About Akumajō Dracula guide for Super Castlevania IV.

Harpy from Legacy of Darkness.

Unused portraits of Harpy from Curse of Darkness.

Harpy from the Curse of Darkness manga. 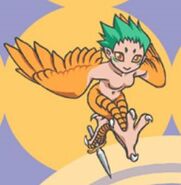 Harpy's illustration from Portrait of Ruin.

Harpy's enemy list entry from The Dracula X Chronicles version of Symphony of the Night.

An Harpy satue from Castlevania: The Adventure ReBirth.
Add a photo to this gallery

Retrieved from "https://castlevania.fandom.com/wiki/Harpy?oldid=314754"
Community content is available under CC-BY-SA unless otherwise noted.