Swings a spiked ball and chain

The Heavy Armor is an enemy in the Castlevania series. It is a heavily armored knight that swings a giant steel ball.

First appearance of the Heavy Armor in the series. Present only in Dracula's Tower, it remains motionless and twirling his flail, waiting for the player to be within reach to extend his weapon towards him.

The range of his weapon is long enough to reach the player, making it an enemy difficult to approach.

Present only on the ghost ship, he can approach the player to wear it and use his flail as such to try to crush him, unlike his previous appearance.

But strangely, in the PCE version, his weapon is mostly satisfied to reach the player even when he is high.

The Heavy Armor appears as part of a two-stage miniboss fight in the Atlantis Shrine, along with the Great Axe Armor. The Heavy Armor will first enter the screen from the right side. As in his previous appearance, he uses his weapon to crush the player. But besides, and despite his great size, he could also jump to either crush the player or pass behind him.

Despite this, he is easy enough to beat: just stay right next to him and hit because the hitbox of his weapon is only at the end of his weapon. Indeed, the handle will not cause any damage.

Called Plate Lord in the English localization, it can be encountered quite early in the game, after the first bosses. As the player get closer, it will try swinging its chained ball while building its power, from 18 ATT to 35 ATT. He will throw the ball once the power reaches its maximum.

A large, animated suit of armor that wields a heavy ball and chain. It swings it around several times before slinging it at Leon. There is one optional place in the Dark Palace of Waterfalls where Leon must manipulate this enemy into throwing the ball at a doorway, shattering it and permitting him entry.

In Portrait of Ruin, he often appears in the company of allied demons, such as ghouls or rulers sword, perhaps to distract the player in order to attack him easily.

Getting back his sprite of Rondo of Blood , he continues to use his weapon as before, however he can bring it back to him to hurt the player in case he has avoided the attack.

When he dies, he can drop Jonathan's Wrecking Ball ability, allowing to use his flail. 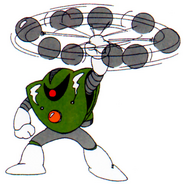 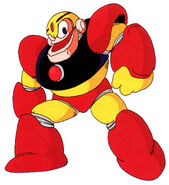 Guts Man
Add a photo to this gallery

Retrieved from "https://castlevania.fandom.com/wiki/Heavy_Armor?oldid=281466"
Community content is available under CC-BY-SA unless otherwise noted.