"Hector is one of Dracula's two human generals. As a Devil Forgemaster he uses his hammer to bring creatures back from the dead."
— Hector's profile description

Hector is a major character in the Castlevania animated series, serving as one of Dracula's two human generals in his army (the other being Isaac). He is a Devil Forgemaster who uses a hammer to bring humans and animals back from the dead and to call demons from Hell into corpses; the resulting creations become newly living monsters which can be enlisted in Dracula's army, loyal to Hector's intent.

He is voiced by Theo James in the English version of the show.[1]

Hector hates humans because of his hard childhood. As a child, he discovered an ability to reanimate dead animals, which he tried to keep as pets. For this, he was despised by both his mother and father, a selfish alchemist. Eventually, Hector burned his house to the ground with his parents inside of it. He eventually moved to Rhodes, Greece, and was later found by Dracula while he was traveling who heard about him from local scholars. Hector eventually became a Devil Forgemaster under Dracula's orders. After Lisa's death, Dracula asked for his abilities to build an army of creatures of the night.

"He's a child in a man's body; that does make him easy to lie to."
— Dracula in Broken Mast

Hector's physical appearance is similar to that in Curse of Darkness, as he is wearing his Devil Forgemaster outfit. He has pale silver-gray hair cut into a bob, pale blue-green eyes and light bronze skin.

Though sweet, Hector ran afoul with the humans in his life because his gifts as a forge master are inherently repulsive. He is cold with those he does not trust, having a resentment for humans due to his childhood. His mother despised him for his gifts and his father sought to use them cruelly for personal gain. Hector escaped their abuse by killing them. Since then he has either been pushed away from or avoided interaction with humans. However, he does not wish for them all to be exterminated, hoping Dracula has plans to cull them and keep a controlled, caged population. Ideally, humans would be treated mercifully in their caged conditions.

Deep down, Hector is a gentle soul. He started using his natural gift at forgemastery because he was sad that animals had died. Hector has a love for the dead animals that he revived using his abilities, even giving them names, and his inner warmth is often shown through the way he cares for them. Though he has no connection or love for humans, he dislikes seeing them suffer. Hector keeps many undead pets but treats them, of all creatures, with empathy. He fails to realize how abusive most vampires are with their "pets".

All Hector wants is to freely engage in his work, have fun with his pets, and be respected. Unlike humans, vampires see value in Hector's knowledge and forge mastery. The vampires are his natural social group. Unfortunately for Hector, most vampires disdain humans, are cruel, and see him only for his use. Worse still, vampires are physically superior with ages of experience in manipulation. If pushed, Hector will fight back but lacks the strength to overcome vampires. Hector is naive and easy prey for them.

Hector is intelligent, educated, and gifted, but he is also very naive. He is often described as a child in a man's body, and he is called a "puppy" by Carmilla. Hector takes people at face value. He is especially vulnerable to feigned respect and empathy. Because he is unsuspected, Hector can be swayed by those who point out how he is already being deceived. By not understanding the social factors around him, Hector lacks a strong center. Because of his child-like naïvety, Hector is easily manipulated by the likes of Carmilla and Lenore, realizing all too late that their plans involve abusing him.

While being naive, Hector is stoic in the face of hardships that befall him. Lenore found it nice, that even "beaten down a dozen different ways" Hector doesn't give up on himself.

"I need an army. The dead must rise and creatures of the night must be called into their corpses. These are your skills."
— Dracula to Hector in Shadow Battles

Hector conjuring with his hammer

Hector and Isaac with their master Dracula

Hector restrained and being slapped by a beaten up Carmilla

Hector as a child

Hector discovers a dead dog as a child

Hector casts a resurrection spell to revive the dog 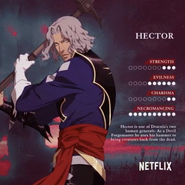 Official art, with Isaac and their master Dracula

Official sheet for Hector's hammer and other assets

Retrieved from "https://castlevania.fandom.com/wiki/Hector_(animated_series)?oldid=291518"
Community content is available under CC-BY-SA unless otherwise noted.