Hell appears in the Castlevania animated series in a more palpable form than it does in the game series, making it clear that this realm indeed exists in this universe, although likely in a different dimension or another metaphysical world, but which nonetheless can be reached from the real world if the proper means are employed.

After Vlad Dracula threatened the people of Targoviste in 1475, telling them he was going to destroy the city after one year had passed in revenge for the unjust execution of his wife, Lisa, using this time to assemble an army of creatures of the night - he at one point also stated that these warriors would be gathered "from the guts of Hell itself".[1] Dracula then proceeded to make full use of the advanced technologies his castle counted with –both scientific and supernatural– to build his army of night creatures with the help of his Forgemasters, who summoned souls from Hell.

Besides souls of the dead ending up in Hell as punishment, another possible method mentioned in the series to reach Hell from the real world would be by traveling through the Infinite Corridor, which, as Saint Germain pointed out, is a "route to many other worlds, and it's certainly possible that one of them is Hell." Nonetheless, he also mentioned that the corridor was nothing more than a system of doors that could lead to other lands, separated from this world's space and time. As such, it's implied that in this universe, Hell is just another realm, only different than ours, and that the creatures we would call "demons" are simply its natural inhabitants.

At the end of the ninth episode of the third season, "The Harvest", Vlad and Lisa can be briefly seen finally reunited and holding each other in Hell - in a place that has taken the form of Lisa's burned house in Lupu, the same place where the events that marked the beginning of Vlad's eventual fall from grace took place.

Death latter states that only humans can reach into Hell (implying that only them can let souls out of it), frustrated that he, with all his almost almighty power, cannot do it himself. Realizing how Dracula's war on humanity had released an overwhelming quantity of souls (which he consumed), Death orchestrated an even greater plan behind the lines, planning to resurrect Dracula and influencing him to continue his war against Humanity to produce even larger quantities of deaths, and with them their souls, so he could consume them, gain their power, and ultimately become omnipotent. 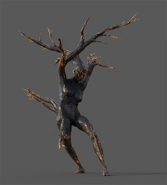 Vlad and Lisa's house in Hell. 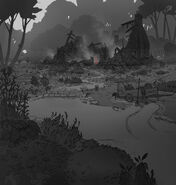 Lisa's burned down house outside Lupu village by Justin Kauffman.

Vlad and Lisa in their ruined house in Hell.