The Hellhound is an enemy in the Castlevania series. It is a dog that breathes red hot flames.

They are a type of undead carnivores that roam Dracula's Castle. They can appear as zombies, ghosts, demons, or even statues.

Features that have been attributed to hellhounds include mangled black fur, glowing red eyes, super strength or speed, ghostly or phantom characteristics, and a foul odor.

Certain European legends state that if someone stares into a hellhound's eyes twice or more, that person will surely die. In cultures that associate the afterlife with fire, hellhounds may have fire-based abilities and appearance.

They are often assigned to guard the entrances to the world of the dead, such as graveyards and burial grounds, or undertake other duties related to the afterlife or the supernatural, such as hunting lost souls or guarding a supernatural treasure. In European legends, seeing a hellhound or hearing it howl may be an omen or even a cause of death.

Hellhounds first appeared in a variety of forms in Super Castlevania IV:

A hellhound appears as a miniboss midway through the first level. Although in the game it is referred to as "Cerberus", it only has one head.

Twin immobile hound statues are found at the gates of hedge maze in the Villa. These come to life upon unlocking and entering the hedge maze during Reinhardt's and Carrie's quests. They unceasingly give chase and should they manage to catch up with the hero, they will start biting their leg, paralyzing them for a moment and allowing the Gardener to take an easy swipe with his chainsaw arm. Both the stone dogs and the Gardener can only be disabled temporarily, but will always come back to life after a moment and continue their chase.

Fire-breathing hellhounds can be found in Lament of Innocence.

The Dead Mate returns in Dawn of Sorrow. It can be found in a couple of rooms in the Silenced Ruins. In order to make the "Dead Mate" entry be recorded in the Enemy list, the player has to kill the old man instead of the dog, which is more difficult due to the constant appearance of Ghouls and other enemies in the area, all this while the dog keeps charging forward, making it more susceptible of being killed first. 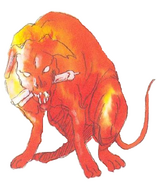 Retrieved from "https://castlevania.fandom.com/wiki/Hellhound?oldid=277209"
Community content is available under CC-BY-SA unless otherwise noted.