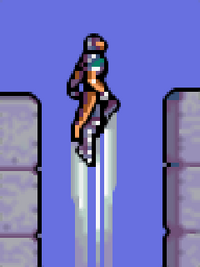 High Jump is the ability to leap extremely high in the air. It is usually one of the last abilities obtained in a game and can be gained through a variety of means, depending on the game. Some uppercuts also perform a high jump.

The High Jump was first introduced in the series upon finding the Gravity Boots (called Levitation Boots in the Japanese version) in Castlevania: Symphony of the Night. Alucard is able to perform the jump by pressing ↓, ↑ + [JUMP]. This move can be performed on the ground or in the air, and multiple jumps can be performed in succession. The ascent can be steered slightly pressing either ← or → on the control pad. Alucard flips around and "lands on his feet" when he hits a ceiling. Richter Belmont and Maria Renard in the Saturn version have similar abilities, without requiring relics to activate them.

The Wolf Form has a "high jump" ability that uses the same command move, though its height is not in the same league as the Gravity Boots.

Later games used various kinds of "wings" for a similar effect, including the Roc Wing from Circle of the Moon, the Griffin's Wing (Griffon Wing) from Harmony of Dissonance and Portrait of Ruin, and the Hippogryph's soul from Aria and Dawn of Sorrow; the move is activated by  pressing L (by default) in midair in Aria of Sorrow, and by pressing ↑ and a specific shoulder button in Dawn of Sorrow and Portrait of Ruin.

The player can also execute this ability in Order of Ecclesia's Albus Mode by pressing the L trigger in mid-air. This can be done several times but it also consumes MP.

High Jump performed by all characters in Symphony of the Night

Roc Wing magic item from Circle of the Moon

Highjump from Aria of Sorrow

Highjump from Dawn of Sorrow

Griffon Wing from Portrait of Ruin

Retrieved from "https://castlevania.fandom.com/wiki/High_Jump?oldid=253066"
Community content is available under CC-BY-SA unless otherwise noted.