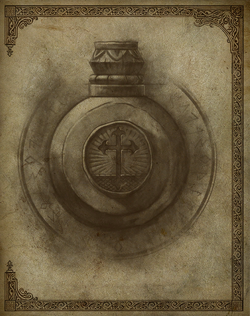 Holy Water Flasks are holy water containers in Castlevania: Lords of Shadow. They are a relic discovered by the abbot of Wygol Village, Vincent Dorin. Despite its power being the only thing which could save the village's people, the then-insane abbot holed himself up in his abbey and hid the power away for himself. After traversing through the abbey's traps, Gabriel takes the water flask away from him, leaving him to perish by the hands of vampires.

The holy water flasks are thrown at enemies and creates a shockwave which damages nearby foes. They are particularly effective against vampires, instantly stunning any of them nearby for a quick-time event kill.

Add a photo to this gallery
Retrieved from "https://castlevania.fandom.com/wiki/Holy_Water_Flasks?oldid=276845"
Community content is available under CC-BY-SA unless otherwise noted.