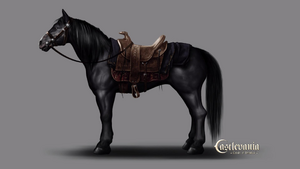 Many notable examples of horses appear in the Castlevania series in many different roles beyond being just mounts.

In the majority of their apparitions in the series, horses are portrayed as enemies, such as equine demons, hybrids or as undead creatures. But they also appear as special attacks, landmarks or benevolent spirits.

Anthropomorphic horse enemies, such as Amduscias, the Were-Horse and the Unicorn have also appeared in Castlevania games.

The Valhalla Knight, the Dullahan from Circle of the Moon, and the Dead Warriors are examples of horses being ridden by knights. They gallop back and forth on horses that are missing their hind side, patrolling a set area. Horses are also seen pulling chariots in the series, such as for Richter Belmont in Rondo of Blood, and for the Gladiator in Aria of Sorrow, which shoots arrows.

Nightmare is a ghostly horse, which may or may not have a rider, which has a skeletal back half, but a fleshy front half.

Mr. Hed is a disembodied, floating horse head that will attack the player in the first stage of the game, The Ruined Mansion. It will remain in place while undisturbed but, if Simon approaches, it will charge in his direction and rise in the air trying to tackle him.

Later in the stage, the skeleton knight Rowdain appears as a boss riding a skeletal horse capable of shooting fireballs. By dealing enough damage to them, the horse is destroyed, leaving Rowdain to attack alone.

The Valhalla Knight is seen running back and forth in some places of the castle, riding an undead horse that has been ripped in half. If the player attempts to jump over this enemy, the knight will point his spear at them, at which point the horse will take a leap when it gets close enough to Alucard.

The Hellfire Beast is a thunder demon with a horse head. It is inspired on the Goetic demon Amduscias, which took the form of a unicorn.

Living horses are seen being ridden by Maria and Richter, but only on the extra modes with these characters and only in the Saturn port of Symphony of the Night. It is also possible to summon a horse spirit with Alucard via the Shield Rod+Knight Shield combo, increasing Alucard's attack by 20 points.

Lastly, a prominent horse sculpture is used on the Warp Room located at the Entrance to set it apart from the others, which are themed after other animals.

Nightmare makes its first appearance in the form of a horse in this game. It patrols different areas of the castle by running back and forth, similarly to the Dead Warriors. Some of them have a rider, while others do not. By capturing the Nightmare's soul, Soma Cruz gains the ability to shoot Nightmares as projectiles.

The Gladiator's chariot is pulled by undead horses, allowing him to patrol set areas on The Arena and on the Chaotic Realm. But he can also shoot arrows across the path behind him.

Concept art suggests that the Nightmare was intended to show up in this game, but no such enemy appears. Yet the Valhalla Knight returns from Symphony of the Night, rebranded as "Dead Warrior".

Aside from returning enemies, horses are part of Charlotte's attacks when using Don Quixote or Tristan&Isolde, which make a distinct horse neigh sound when unleashed.

This game features Ghosts resembling Mr. Hed. They are horse heads that float toward Shanoa and are engulfed in a purple aura.

Nightmares return in this game as enemies in the Tymeo Mountains, using the design seen on concept art for Dawn of Sorrow. They are armored horses whose back has decayed and exposed its bones. They run across the room attempting to trample the player, and drop Horse Hair, which is used by George to create his violin.

Eligor is a gigantic armored centaur boss whose body is covered in weapons. Shanoa must maneuver between Eligor's legs while avoiding his hooves, evading giant arrows and his tail that shoots out like a harpoon. Defeating him without taking damage awards the player with a Boss Medal describing Eligor as a demon-horse rider.

Horses are important animals which role as mounts in Castlevania: Lords of Shadow. During the game, Gabriel's horse makes its first appearance as a mount, but it dies when Gabriel is fighting with werewolves. As the game begins, Pan takes form of a horse who is able to ride through the Hunting Path. Gabriel rides this horse to escape wargs. 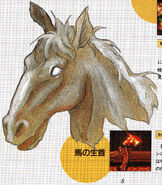 Maria on horse from Symphony of the Night (Saturn)

Retrieved from "https://castlevania.fandom.com/wiki/Horse?oldid=265026"
Community content is available under CC-BY-SA unless otherwise noted.