In this area, Leon starts out inside of a cathedral and progressively makes his way down below into the crypts, passing through various libraries and study halls along the way. 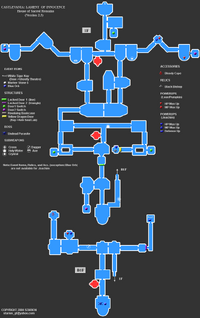 Retrieved from "https://castlevania.fandom.com/wiki/House_of_Sacred_Remains?oldid=284709"
Community content is available under CC-BY-SA unless otherwise noted.