Howard & Nester, later retitled Nester's Adventures, was a comic strip that appeared in every regular issue of Nintendo Power from its 1988 launch up through the end of 1993. The strip chronicles the adventures of the bow-tie wearing Howard Phillips (based on the real-life person who was President of the Nintendo Fun Club at the time) and a stubborn red-headed teen named Nester. The two ventured into the worlds of various NES games, often providing tips for the game in question to the readers.

In the June 1991 issue (Volume 25), Howard was written out of the strip after his real-life counterpart left Nintendo to work for LucasArts. The strip was retitled Nester's Adventures the following issue and continued publication until Volume 55 (December 1993). 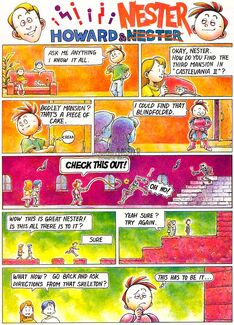 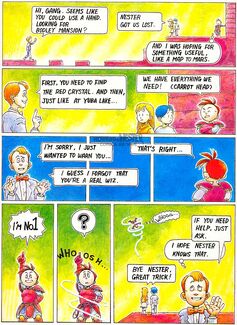 Page 2
Add a photo to this gallery

Retrieved from "https://castlevania.fandom.com/wiki/Howard_%26_Nester?oldid=251267"
Community content is available under CC-BY-SA unless otherwise noted.