I Have a Scheme

I Have a Scheme

Investigators
A Seat of Civilisation and Refinement

"We would own and control the land from here to Braila. Almost to the Black Sea. That's not a country or a region, love. That's an empire!"
— Morana

I Have a Scheme is the fourth episode of the third season, and the 16th episode overall, of Netflix's original series, Castlevania.

Sumi and Taka share their history with Alucard. Also, Saint Germain gains entrance to the priory, and Isaac receives an icy welcome in Genoa.

Taka and Sumi are looking at Alucard's puppets, which are based on his friends, Trevor and Sypha, prompting Taka to asks how long Alucard has been alone in the castle. However, he's unaware of how much time has passed since he last saw his friends.

Sumi starts to tell her and Taka's lives at Chō's secret fortress in Northern Japan. Even though countless vampire hunters came to take Chō's head, they were no match for the ruthless vampire. Not only that, but her human slaves had to watch how each hunter fell to their knees in defeat. However, little did Chō know that Taka and Sumi were watching her, studying how she lived, studying how she fought, learning from her every victory, memorizing her every weakness.

Their lives became nothing but the development of plans to end their master, but when Chō left to join Dracula's war court, Sumi and Taka escaped the compound. They killed all of Chō's guards and freed the prisoners. But knowing that Chō would return, Sumi and Taka left the country to hunt their former master. But even though she's already dead, another vampire will take her place, and their freedom will mean nothing. As such, they need Alucard to help them fight the creatures of the night.

Striga and Morana are a bit wary of Carmilla's plan. The lovers reminisce about how they came together, including the bad times. Striga believes it would be hard to execute Carmilla's plan. If the plan succeeded, they would be in control of an entire empire, ruled by four women.

Lenore once again visits Hector. She gives him one shiny red apple if he answers her question. But before Lenore can ask, Hectors cuts her off and reveals that he knows why Carmilla is keeping him alive. Now that she confirmed Hector's suspicion, she asks her question: what would Hector like? Which he answers: shoes. Lenore has another question: what was Dracula going to give him?

Hector's reward for helping Dracula was his freedom, to be spared from the slaughter. His answer made Lenore wonder if Hector expected a prize to be presented to him for his deeds.

Saint Germain gains entrance to the monastery. However, the monks don't trust him. Even though Saint Germain has access to the priory, he can't stop sucking up to the monk, which the latter finds to be patronizing. While inside, Saint Germain notices the feces, blood, and bugs crawling around.

Before he can start looking through the pile of books, Sala returns and spouts how the night creatures actually bring light. The prior's words scare Saint Germain, and he questions the monk's loyalty to God. Even so, he's fascinated with Sala. Even wondering how the preacher came to the symbol on his armband. It seems those who bore witness to the Visitor –night creature that appears in episode three– wear it because it gave it to them, it's its mark. However, Saint Germain reveals that the symbol is the alchemical sign for sulfur used by philosophers to denote Hell. This tidbit makes Sala's eyes glitter with joy. After Sala leaves, Saint Germain picks a book that captures his interest.

Trevor and Sypha sneak around the priory before a monk spots them and asks them to leave. Sypha tries to defuse the situation. However, their short discussion revealed quite a bit of information about the monks and their monastery.

Isaac and his night creatures arrive at Genoa; however, it's an icy welcome as a group of men-at-arms approach him. Isaac tells them that they have nothing to fear from him, they're just leaving. But the sergeant will not allow them to enter Genoa. Isaac tries to talk with the man peacefully, but once again, he experiences the rudeness of humans, as such, leaving Isaac no choice for his night creatures to attack.

– Taka: How long have you been here on your own?
– Alucard: Oh, years. Or possibly a couple of months.

– Striga: It's never, "Gather round, girls, I have a dream to tell you about." It's arms waving in the air and "Vampires and sisters, I have a scheme!"

– Sypha: Priests with knives. This is Gresit all over again.
– Trevor: Are you sure you didn't overplay it? I mean, you do have a... habit of... uh...
– Sypha: Perhaps. But quietly confident people are competent and careful. Nervous people make mistakes. I'd rather they were nervous than happy in their work.

–Hector: What if you're lying to me?
– Lenore: Oh, I don't have to lie to you. I have no interest in faith. Faith makes for terrible diplomacy. This is simply commerce, we don't have to have faith in each other, do we? We don't have to guess. It's simple. These are rules. I give you something, you give me something.

– Isaac: Why do I keep doing the same thing and expecting a different result? Isn't that the definition of insanity? Am I mad? You know... one day, the last one of you will ask me, "Why did you work with Dracula himself to murder all the people?" And you know what I'll say? It's because you're all so *** rude. 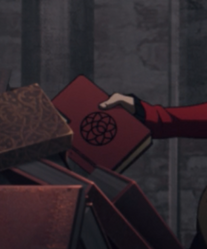 Lenore has a sad expression when entering the dungeon to visit Hector the second time.

Lenore talking about faith in negotiations and "terrible diplomacy".
Community content is available under CC-BY-SA unless otherwise noted.
Advertisement