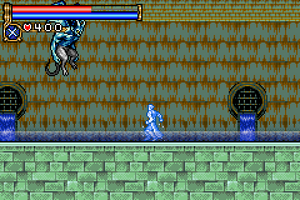 Ice is one of the basic elemental attributes found in the Castlevania series.

The first ice spell used in Castlevania was Sypha Belnades' Frozen Crystals spell she could use when armed with the Ice spellbook in Dracula's Curse. She would scatter several ice crystals upwards which affected an area 180° above her head. The range was not very strong, but any normal enemy that it touched would instantly freeze, regardless of how many hits it could still take, for several seconds. Sypha could destroy it if she was able to strike it with her Warakiya staff before it wore off. In Castlevania Judgment, Sypha had a variety of ice spells at her disposal. Frost Wall (shake remote while running) causes a series of ice shields to form around her. If her opponent touches the shields when not blocking, they become frozen for several seconds. Upon attacking again, the Icicle Blade spell is activated and long icicles protrude out from each of these shields. For the Ice Storm spell (shake the remote while holding the trigger button while in the air), Sypha opens her book in front of her and a series of flurry of ice daggers come out of it towards her opponent.

Circle of the Moon was the only other 2-D Castlevania game to feature the ability to freeze an enemy solid. However, they were only frozen if their health points were depleted to a certain point. In that game, Nathan Graves is able to perform several Ice Spells when combining cards with the Serpent card. Combining that card with the Jupiter card (the defense card), Nathan Graves is able to form four ice balls that orbit nearby him around him very fast. These are very effective at blocking enemy projectile attacks and can accumulate a modest amount of damage on enemies that they hit, eventually freezing them. Combining it with the Apollo card allows Nathan to throw large snowballs at enemies, which shatter, scattering shards in every direction.

In Harmony of Dissonance, Sypha's descendant Juste Belmont is able to combine any of the traditional Belmont sub-weapons found in the game with the Ice Book for a new ice-based attack. When combined with an Axe, he summons a giant icy mass down upon his enemies. It starts from an upper corner of the screen and continues down and towards the opposite lower corner until it strikes an enemy or a floor or wall, when it shatters. Combining it with Holy Water causes ice to form around Juste (forming a shield) and around nearby enemies (which damages them). After a while, these ice envelopes shatter, sending shards in all directions causing damage to any enemies they strike. When combined with a cross, a spiky ice ball follows Juste around. When he attacks an enemy, it spins around, shooting its sharp icicles from a single point in spiral-like pattern. It gets smaller after each attack until it bursts altogether. When combined with a Sacred Fist, Juste lunges towards an enemy, his arm enveloped in an icy casing, and smashes that ice into his enemy. If the enemy does not die on the spot, it will likely damage Juste soon after. When combined with the Holy Book, several evenly spaced pieces of unseen ice are spread about the ground he is on on the entire screen. They then sublimate violently in flame-like patterns, causing damage to anything caught in the blue "flames".

Oddly enough, Soma Cruz lacks any kind of pure ice spell in Aria of Sorrow, though the Water Spray effect he gains from a Merman Soul has the same effect. He has the ability to "roll" a growing giant snowball on the ground using the Yeti Soul and push it into enemies.

Some of Hector's Mage-Type innocent devils (those that were at some point a Talon Rod) have the ability to use the Freeze spell to trap an enemy in a block of ice. They will be vulnerable to attacks from Hector until they thaw out. Yoko Belnades has a very powerful ice spell at her disposal. A spread of several large icicles appear slowly in a 180 degree arc above her head. The first one appears straight in front of her, followed by another one at a higher angle than that one, followed by another one, until one appears behind her. They then shoot outwards for massive damage.

Charlotte Aulin is able to use the Ice Fang spell. This summons a two portals in front of her parallel to the ground and causes four icicles to come out of them in a way resembling teeth clamping in a jaw. One icicle is thrust downwards from the upper portal to the lower portal, following another a little further away thrusting upwards from the lower portal to the upper portal, followed by the next one from the lower portal and the next one from the upper portal. When fully charged, eight larger icicles are summoned instead. Loretta Lecarde is an expert in ice attacks. As a boss, she has a large variety of ice spells at her disposal. However, as a playable character, she only has one. She can cause a continuous stream of icy wind to be sent shooting out in any direction (tapping the stylus at any point causes the wind to be sent out in that direction).

In Order of Ecclesia, the Grando glyph causes an icicle to be thrown like a dagger. The Vol Grando glyph causes Shanoa to toss some ice dust up and forwards. When it hits the ground, and if the ground is close enough, it will erupt in a fantastic growth of ice crystals radiating from where it hit the ground. Combining two ice spells causes a blizzard to cyclone around her and upwards. Another ice-based spell at her disposal is the Torpor glyph. Shanoa tosses a crystal to the ground and a huge orange crystal grows upward. Though this deals ice damage, it is not really an ice spell and cannot be used in any glyph unions. When Shanoa combines an ice glyph with a fire glyph, she summons a ball of ice and fire, which follow an intertwining wave pattern across the screen.

A common weapon is the Icebrand sword, also known as Rahab's Frost or Rahab's Sword, which deals ice damage and sometimes has a special ice based attack. In Symphony of the Night, it is a fast weapon with the ability to use an ice burst which is twice as powerful as its normal swing. In Aria of Sorrow, it doesn't have the ice burst attack, but now every swing sheds ice crystals around it. In Dawn of Sorrow and Portrait of Ruin, a diamond shaped ice block protrudes from the end of the sword making a "smack" impact noise, although it still deals Slash damage (in addition to Ice damage). Additional smaller ice crystals radiate a short distance in front of it, above diagonally, and below diagonally. Its special move is considerably different from its special move in Symphony of the Night. Instead of a quick powerful burst of ice energy, a relatively weak ice cloud is sent forward and moves slowly across the screen.

Circle of the Moon and Order of Ecclesia feature ice swords that form as a result of magic rather than being equipable items. Using a Mars + Serpent card combo in Circle of the Moon, Nathan wields a quick overarching sword that can freeze enemies. By combining any Ice-based Glyph with any Weapon Glyph, Shanoa uses essentially a larger and slower version of Nathan's ice sword. It is composed of several icicles, is swung overhead, and then shatters after it has been used.

Joachim Armster has the ability to enhance his swords to include the ice element after defeating the Ice Elemental creature. His swords can have the Fire and Thunder enhancements simultaneously.

In Lords of Shadow 2, Dracula's Void Sword can be enhanced with Ice properties after obtaining the Primordial Void Gem from the Stone Golem. Dracula can freeze enemies at the cost of Void magic to temporarily stop them in their tracks, as well as cause greater damage with the Shadow Whip and Chaos Claws.

In Circle of the Moon, Nathan can summon a great ice serpent when combining the Serpent card with the Uranus card (the summons card). The serpent moves from one corner of the screen to the next, and is accompanied by an ice storm, which does continuous damage to everything on the screen. When combining it with the Saturn card, he summons a Ghost Familiar, which hovers around and hones in on an enemy, sticking with it until it has been destroyed, and dealing Ice damage and potentially freezing the creature.

In Portrait of Ruin, Charlotte's Tristan&Isolde spellbook summons a jousting knight from her book, which is surrounded in blue and deals ice damage. It is the stronger, ice counterpart to the similar fire-based jousting knight spellbook, Don Quixote.

Maria Renard's Dragon summon and crash has the ice attribute in Portrait of Ruin and the Dracula X Chronicles version of Symphony of the Night.

In the game Castlevania Legends, Sonia Belmont is able to use an Ice Soul which replenishes all of her life for a large sum of 20 hearts.

See the following pages for information about the Ice element for specific games:

Ice attacks in Grimoire of Souls have the ability to inflict the Frozen status on a target, reducing movement speed and potentially freezing them solid.

Retrieved from "https://castlevania.fandom.com/wiki/Ice?oldid=296552"
Community content is available under CC-BY-SA unless otherwise noted.