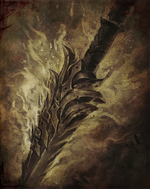 The Igneas Blade is a sword used in the forging of the Crissaegrim.

In times before the arrival of the Lords of Shadow, an unscrupulous general managed to make a deal with the demon king Igneas. In it, he offered to fulfill an unknown wish for the creature in exchange for the key to the entire castle he meant to conquer. The key was none other than an enormous broadsword with an eternal flame capable of consuming any material it hit against. With it, its owner was able to conquer a hundred territories and terrorize the rest of the free countries, until the demon returned to collect on his debt. The infernal creature broke the seal that held the agreement closed and, inside, he read: "That which is gained by fire, must be destroyed by fire." The general, enraged, brandished the magical sword, devastating everything in his way until all of his cities were reduced to ashes and his weapon shattered into pieces. The fragments that could be recovered were mixed with the steel of Crissaegrim and still today light up its blade with the intensity of hell.

After the final battle with his father, Alucard would recover the remains of the Igneas and include the fragments into the forging of the Crissaegrim, giving his sword a lethal burning edge when needed, increasing its power, but costing precious speed.

Retrieved from "https://castlevania.fandom.com/wiki/Igneas_Blade?oldid=258764"
Community content is available under CC-BY-SA unless otherwise noted.