For the original timeline version of this place, see Infinite Corridor.

"The Infinite Corridor is a route to many other worlds, and it's certainly possible that one of them is Hell. However, in the experience of those of my particular expertise, it is in fact a system of doors to other lands, separated from our own by space and time. Portals to the Corridor are few and far between, and they drift in and out of existence."
— Saint Germain

The Infinite Corridor is a location in the Castlevania animated series. It is an alternate realm that gives access to many different lands separated from this world's space and time.

The Infinite Corridor is presented by Saint Germain as a mystical path, out of time and space, which acts as a central waypoint linking our world to many other worlds and dimensions, like a hidden existential thoroughfare. To those in it, it looks like an endless tunnel of swirling turquoise and pink energy. Most people do not know of its existence, except for a few scholars educated in the magical arts and those knowledgeable in the arcane. However, even for some of those, like Alucard believe that, the Corridor is nothing but a fairy tale.

Doors to the Corridor itself are sparse and flicker in and out of existence, and even these are very difficult to bust open, as opening the way is tremendously taxing, demanding an appalling act of will. For instance, the Visitor, willingly crucified under the Priory of Lindenfeld had to undergo gruesome mutilation and duress while instructing the unwitting monks on how to open a portal to the Corridor. It instructed the monks to carve the alchemical rune of Saturn on the houses in town and to paint the alchemical sign for sulfur (Hell) on the floor with its blood. When they started the ritual to open the Corridor, the runes ignited, immolating the houses and the people within, causing a confluence of souls that was swallowed by the Visitor and breathed into a preexisting planar crack leading to the Corridor, opening it completely.

The only known way to open a gate to the Corridor from scratch and from anywhere was when Saint Germain used the Alchemist's Key, charged with innumerable deaths, to tear the fabric of reality, which would later open wider when he harvested the souls of attackers and defenders alike in Dracula's Castle in a ritual of death magic to pull Dracula and Lisa's souls from Hell.

Once in the Corridor, those with magical aptitude can try to open doors on its walls, opening a gate to other worlds and dimensions. However, doing also demands great power, and only those with great magical power or with access to a considerable magical source can actually control the energies of the Corridor with any degree of accuracy. As per Saint Germain's words, it took him one year to recover his strength after using the Corridor once.

In the series, there are only two named entrances to the Infinite Corridor. One is under the Priory in the town of Lindenfeld. Another was located in a castle in Livonia, as Trevor Belmont tells of an ancestor of his who found the portal to the Corridor, and promptly brought the castle down on top of it. These entrances are invisible to the human eye unless sensed with magical relics such as Saint Germain's jewel, made or enchanted with Lithomancy, or otherwise opened via a ritual that requires "defilement of the soul" or the sacrifice of dozens of souls.

As part of the destinations the Infinite Corridor can take someone to, the following were witnessed by Saint Germain:

The Alchemist's domain, an infinite and distorted library.

The Nine Planes of Hell.

The City of Haze.

A Savannah-like location with robots.

A jungle on a planet with spaceships and a destroyed moon. 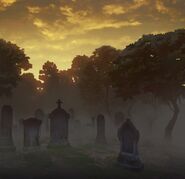