For the ability to become invisible, see Invisibility.

The Invisibility Potion (sometimes called Medicine Jar) is a rare item found in classic Castlevania games. It grants the hero invulnerability to enemies for a small amount of time. It can be found by breaking candles, defeating enemies, or found in breakable blocks.

Called Transparency Elixir, besides granting Richter complete invulnerability for a short period of time, it also allows him to kill any enemy instantly upon contact. This added property can be very useful in some areas where strong enemies are encountered and the player is forced to traverse in a rush, like the flooding section in Stage 5'.

In Harmony of Dissonance, they can be collected and activated from the inventory screen for brief invincibility whenever the player desires.

In Lament of Innocence, this is a relic that drops from the Mirage Skeleton.

The Tiramisu Fairy-Type Innocent Devil can learn the Invincible Vase ability. To learn it, Hector must defeat a certain number of enemies while this Innocent Devil is summoned. When cast, the classic yellow jar will appear and break over Hector's head, granting him 10 seconds of invulnerability (note that this ability also disables stealing in many scenarios, especially on Death).

Similar items in other gamesEdit 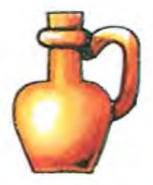 Retrieved from "https://castlevania.fandom.com/wiki/Invisibility_Potion?oldid=285202"
Community content is available under CC-BY-SA unless otherwise noted.