The Iron Gladiator is an enemy in the Castlevania series. He is a demon stitched together from the bodies of Roman gladiators. He appears as a regular enemy in Castlevania: Curse of Darkness and as a miniboss in Castlevania Judgment.

The Iron Gladiator is a powerhouse that can knock the player away with every punch, by either smashing the ground, swinging his chained arm around, or firing it as a projectile; this attack can paralyze the player, leaving them vulnerable for a devastating following blow.

When he swings his chained arm, allow him to slam it on the ground (do not have your Innocent Devil out) as this leaves him open for an attempt to steal a Damascus Steel, which can be used to craft stronger equipment.

The Iron Gladiator appears just like he did in Curse of Darkness; however, in Judgment he is a sub-boss in Story Mode or a random encounter in Castle Mode. His attacks are the same from his previous appearance, but he lacks the "arm shooting" projectile-like ability that paralyzes the player.

Unused portraits of Iron Gladiator from Curse of Darkness 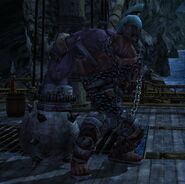 Iron Gladiator from Judgment
Add a photo to this gallery

Retrieved from "https://castlevania.fandom.com/wiki/Iron_Gladiator?oldid=291075"
Community content is available under CC-BY-SA unless otherwise noted.