An Item Crash, also known as Item Crush or Super Attack, is a recurring special attack featured in the Castlevania series in which the player character unleashes the hidden power of a sub-weapon. These kind of attacks were first introduced in Castlevania: Rondo of Blood, and since then have become a staple in the series. Performing an Item Crash costs many more Hearts than the normal sub-weapon's attack, but generally unleashes a devastating attack that may be capable of killing all enemies onscreen or greatly diminish a boss's HP.

When the heart indicator flashes green, the player has enough hearts to perform an Item Crash using the designated button.

When the heart indicator appears translucent, the player has enough hearts to perform an Item Crash using the designated button.

Pluto + Salamander - By performing the ↓ ←(→) ↑ + [Attack] combination, Nathan Graves unleashes his current sub-weapon's Item Crush. Each one costs 4 MP and a determined number of Hearts. 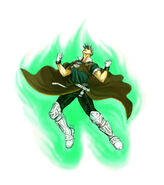 Artwork of Nathan Graves performing an Item Crush from Circle of the Moon.