Jaime Murray is a British actress and voice actress. She is best known for her roles as Lila Tournay on Dexter, Fiona/The Black Fairy on Once Upon A Time, Gaia on Spartacus: Gods of the Arena, Nyssa al Ghul on Gotham, and Stacie Monroe on Hustle. She also portrayed the role of the vampire Gerri Dandridge in the direct-to-video sequel Fright Night 2: New Blood.

She voices Carmilla in the Castlevania animated series. 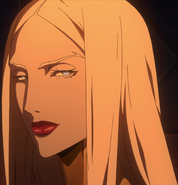 Carmilla from the Castlevania animated series.
Add a photo to this gallery

Retrieved from "https://castlevania.fandom.com/wiki/Jaime_Murray?oldid=252863"
Community content is available under CC-BY-SA unless otherwise noted.