Attacks with an axe and a shotgun

"Jason"[1] is an enemy in Akumajō Special: Boku Dracula-kun and a boss in Kid Dracula (GB).

Although he is never mentioned by name, the hockey-masked undead murderer from the Friday the 13th movies does have a presence in Castlevania.

In Akumajō Special: Boku Dracula-kun, he appears in the subway section going from car to car in search of victims. He then crawls up from behind the subway and attempts to attack with an axe. This appearance may be a throwback to the 1989 slasher film Friday the 13th Part VIII: Jason Takes Manhattan, where Jason comes to New York to continue his wave of murders.

In Kid Dracula (GB), he appears as a boss at a lake cabin, where he attacks with an axe and a shotgun. His use of a shotgun in this game is probably a reference to the character Rick Taylor from the Splatterhouse horror-themed beat 'em up series (which also homages the Friday the 13th films), a masked man in a jumpsuit who often makes use of this weapon. 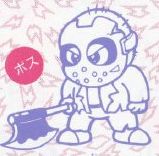 Retrieved from "https://castlevania.fandom.com/wiki/Jason?oldid=270136"
Community content is available under CC-BY-SA unless otherwise noted.